The official press release is as follows:
Wiltshire’s Fox Talbot Museum in the village of Lacock is to celebrate the 175th anniversary of the photographic negative with a series of special events throughout the summer. The discovery of the process of reproducing images through negatives was made by former Lacock Abbey owner William Henry Fox Talbot in 1835, when he reproduced a grainy image of a window in Lacock Abbey.

This pioneering discovery has changed the world forever, enabling future generations to capture the lives and world around them, something which had only previously been possible through talented painters. The creation of the photographic negative is well documented in Fox Talbot Museum & Village which was created in honour of Henry.

The museum is open year round and from 1st to 3rd May, 2010 is organising a special photography festival to celebrate the anniversary. Other special anniversary events will continue to occur throughout the year.

Bryn Jones of VisitWiltshire’s Tourism Partnerhship says, “It’s quite fitting that we will be celebrating the birth of photography in Lacock, Wiltshire this year, as the village has become famous as the location of many a feature film and TV drama. Capturing these using modern day camera equipment would have been unthinkable without the pioneering efforts of early photography by William Henry Fox Talbot 175 years ago.” 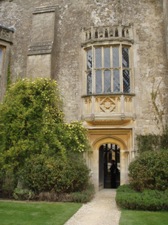