Christina: her identity is revealed after 102 years 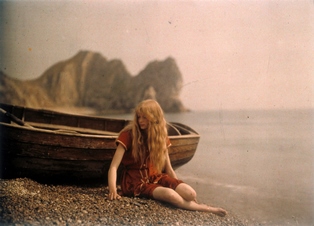 The mystery surrounding the identity of a girl, known only as ‘Christina’, has been solved after her striking 102-year-old colour portraits were seen around the world, including on BPH. The images are part of The Royal Photographic Society Collection at the National Media Museum, and three are currently on show in the exhibition Drawn By Light: The Royal Photographic Society Collection (National Media Museum, Bradford, until June 21).

Initially, Christina was thought to be the daughter of Mervyn O’Gorman, the amateur photographer who took the shots. But research showed O’Gorman had no children, meaning her true identity remained a mystery, until now.

As a result of seeing the images, Mr Stephen Riddle contacted National Media Museum curator Colin Harding to say he had a set of stereoscopic slides by Mervyn O’Gorman, which had been passed to him by his father-in-law. The slides feature colour autochrome pictures not previously seen by anyone at the Museum.

Captions on the slides refer to Edwyn and Daisy Bevan, along with ‘the children’, Anne and Christina, picturing them in various locations including the beach at West Lulworth and outside an address in Chelsea Embankment.

Colin Harding, Curator of Photographs and Photographic Technology at the National Media Museum, said: “We are very grateful to Mr Riddle for contacting us and it was a genuine thrill to see these images. After all the recent attention Christina had been getting I hoped they would give us sufficient clues to finally confirm her identity. It turns out Christina wasn’t O’Gorman’s daughter. Indeed, she wasn’t a relative – either close or distant.

“Christina’s full name was Christina Elizabeth Frances Bevan. She was born in Harrow on 8 March, 1897 and died in 1981. Christina was the daughter of Edwyn Robert Bevan (1870-1943), a prominent philosopher, writer on comparative religions and lecturer in Hellenistic Studies at King’s College, London.

“The Bevan family lived at no. 6 Chelsea Embankment – just a two minute walk from the O’Gorman’s home at 21 Embankment Gardens. The precise relationship between the two families still needs to be explored – perhaps Edwyn and Mervyn were members of the same club, or perhaps they shared a mutual interest in automobiles. Perhaps Mervyn O’Gorman’s wife, Florence, and Daisy were friends.

Whatever the link, both families were clearly on friendly, first name terms. Certainly, the friendship was sufficient for Mervyn to accompany Daisy and her two daughters on a trip to Lulworth Cove in August 1913, where he took portraits of Christina.”

The exhibition Drawn By Light: The Royal Photographic Society Collection was previously displayed at Media Space in the Science Museum, and runs until Sunday 21 June at the National Media Museum.

Above: Christina, Daisy & Anne, walking to the beach in West Lulworth - the location of Christina’s portrait shots, August 1913. Stereo-autochrome. By Mervyn O’Gorman, courtesy of Stephen Riddle.

Below: Windsor Park, Daisy Bevan and the children watching for birds, June 1913. Stereo-autochrome. By Mervyn O’Gorman, courtesy of Stephen Riddle.

Fascinating, and just to say thanks to BPH for flagging the ending of the exhibition up, otherwise I would probably have missed it.  All attempts to get registered on the Bradford museum's mailing list have come to nothing...  Best exhibition they have had there for years, it's what the place should be about to me.

Wonderful to have her true identity known.  I looked at Mervyns neighbours on Embankment Gardens in the 1911 census, but didn't check on Chelsea Embankment !  Mervyn's book 'Verses Gloomy & Gay' was dedicated to the wife of a neighbour, and as he lived in his house for nearly 60 years, it seems he was friends with many in his neighbourhood.  A lovely end to the story.  Plus the Daily Mail still managed to print the images the wrong way round !