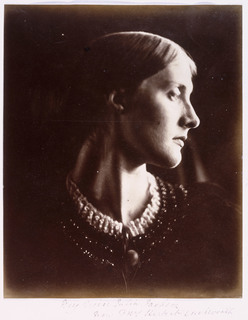 The 2015 bicentennial anniversary of Julia Margaret Cameron’s birth is a timely opportunity for a reappraisal of the interdisciplinary significance of her work. The last twenty years have witnessed growing art-historical and literary interest in this pioneer of Victorian photography, yet much remains to be said about the range and import of her cultural influences, as well as her participation in Victorian debates surrounding the arts and sciences, religion and philosophy.

While scholarship on the interrelations between Victorian visual and verbal cultures has flourished in the past two decades, Julia Margaret Cameron’s contribution to this paradigm has received relatively little attention. With the exception of her photographic illustrations of Tennyson’s Idylls of the King, her engagement with biblical, classical and literary narratives has been overlooked. Similarly, the critical focus on Cameron’s photographic portraiture has occluded her participation in wider Victorian artistic, scientific, philosophic and religious discourses.

This conference aims to generate renewed interest in Cameron’s intellectual and aesthetic exchanges with Victorian artists, theorists, writers, and scientists.Planned to coincide with the 2015 bicentenary celebrations of her birth, it aims to debate the importance and legacy of her cultural contribution; to emphasise the interdisciplinary appeal of her photography; and to examine her significant engagement with key aspects of Victorian technical and cultural innovation.

The conference will include an evening performance of Virginia Woolf’s Freshwater: A Comedy on Friday 3 July and an organised tour on Sunday 5 July to Dimbola Museum and Galleries, Julia Margaret Cameron’s home in Freshwater, Isle of Wight.

Cost: £120.00. Includes 3 day conference registration, a ticket for Freshwater: A Comedy and travel and entry to Dimbola Museum and Galleries

The programme is here.

More information and registration is here.