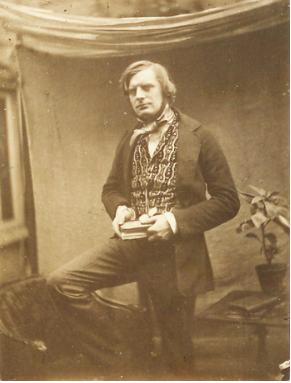 One of Roger Fenton’s (right) more popular images from the Crimean War is entitled Council of War held at Lord Raglan’s Head Quarters the Morning of the successful Attack on the Mamelon, Portraits of Lord Raglan, Maréchal Pélissier, and Omar Pacha (below). It was originally shown under this title at an exhibition of Fenton’s Crimean pictures held in Pall Mall in London in November1855 according to the official catalogue. In the image, Lord Raglan, Omar Pacha, and Aimable Pélissier, the Commanders-in-Chief of the British, Turkish and French forces respectively, sit around a small table looking at a map seemingly discussing military operations. Omar Pacha and Pélissier are in full military uniform while Raglan wears a sun hat and civilian clothes. The title of the photograph suggests that they were adding the final touches to an attack that was to take place on Russian positions later that day.

The attack on the Russian-held White Works and Mamelon by the French and a position known as the Quarries by the British took place late in the afternoon of 7 June 1855. The image’s title indicates that Council of War was taken that morning. However, this was not the case. Fenton in his letters home wrote that on 5 June 1855 he had breakfast with Pélissier and arranged to take his likeness at the British army headquarters early the next morning. Fenton also reported that he intended to ask Omar Pasha to be there as well so that he could also take his portrait. This arrangement was confirmed by William Romaine, who was the Deputy Judge Advocate with the British army in the Crimea. He wrote in his journal on 6 June 1855 that Pélissier had arrived at British headquarters at 6.00 h that day with ‘a box full of finery’ in order to have his portrait taken by Fenton. He also reported that Pélissier, Omar Pasha and Raglan came out of the headquarters’ building at 10.00 h where a small table with a map had been placed and had their portraits taken in a group. Fenton took other pictures of Pélissier and Omar Pacha posing in their ‘finery’ at British headquarters on the same day.

The above information provides very strong evidence that Council of War was taken on the morning of 6 June 1855 and not 7 June 1855. It also reveals that Fenton arranged for Omar Pacha and Pélissier to be at British headquarters on the morning of 6 June 1855 for formal portraits and this was the main reason for their visit and not to discuss pending operations. Indeed, individual portraits of the two wearing the same ‘finery’ as in Council of War exist and these were presumably taken at the time.

The actual detailed planning session for the attack on the Mamelon, the Quarries and other Russian positions on 7 June 1855 is reported to have taken place on 4 June 1855 with seventeen French and British officers, many who were artillery and engineering experts, participating. Fenton must have realised on the morning of 6 June 1855 that he had a unique photo opportunity with all three Allied leaders at the same place at the same time. Why then was the wrong information on the day of the photograph and an impression created that those photographed were in the process of planning the forthcoming assault given in the picture’s title? One can only speculate that it was meant to heighten public interest so as to promote sales of the image at the London exhibition.

The Council of War (June 1855) shows the three commanders of the allied armies planning their successful assault on the Russian fortifications at Mamelon on the morning of the attack. The photograph of Lord Raglan, Maréchal Pélissier and Omar Pasha became one of Fenton's best-known portraits …………..In August 1855, Queen Victoria wrote in her journal that she had viewed some of Fenton's work, commenting that the portrait was 'one, most interesting, of poor Lord Raglan, Pélissier & Omar Pacha, sitting together on the morning, on which the Quarries were taken’.

Victoria may not have been amused had she known at the time that she had been misinformed about the date!

This contribution to the blog was written because the facts concerning Council of War should be known by all Crimean War photo-historians. More information for those who are interested can be found in the article: Jones, D.R. (2017) The Council of War. The War Correspondent 35 (2), 34-36. 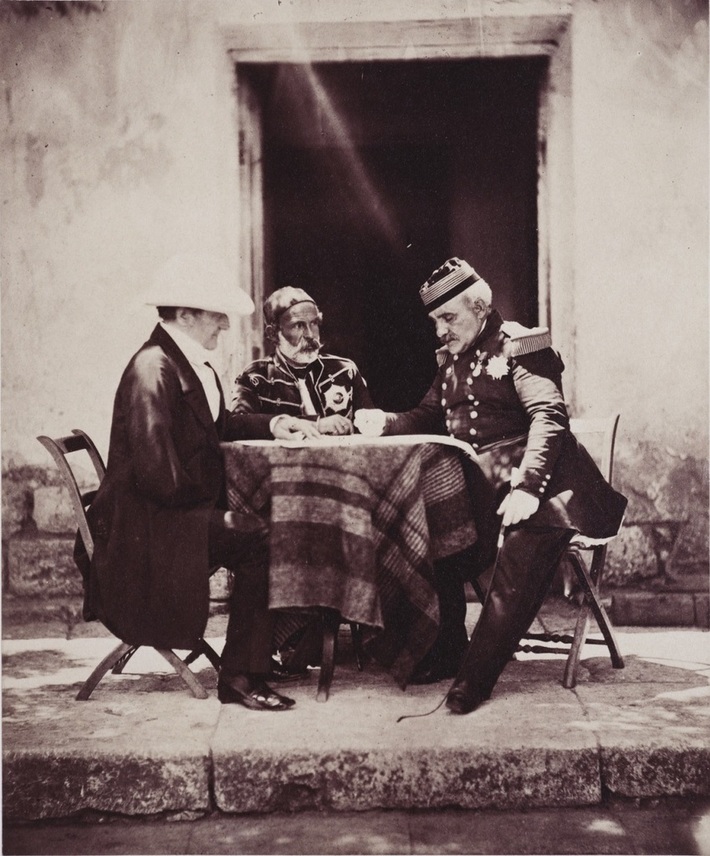