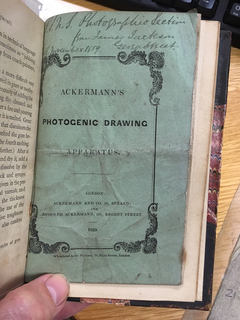 For the last year or so a group of volunteers have been doing a stock-take of the Perthshire Society of Natural Science (PSNS) library held in Perth Museum. This is prior to the closure of the museum and removal of its contents to a new collection store to be built as part of Perth and Kinross Council’s proposed cultural programme with the redevelopment of the City Hall.

Among the library’s collections volunteer David Perry has discovered a copy of Ackermann's Photogenic Drawing Apparatus: Directions for Use. This 8-page pamphlet was published in April 1839 and it was the first photographic instruction book to be printed. It accompanied a box of paper, a printing frame and chemicals for making ‘photogenic drawings’. The pamphlet explained how to use the apparatus to produce photographs according to Henry Talbot’s pioneering paper negative process. Talbot had been experimenting since 1834 and publicised his experiments in January 1839 to the Royal Society in London after hearing about Louis Daguerre’s parallel experiments in photography in France. 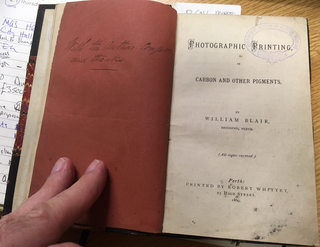 The discovery of the pamphlet in the library doubles the number of known copies in existence from one to two. The only other known copy is in the library of the Royal Photographic Society, now held at the Victoria and Albert Museum, London, from which a reprint was produced by the Society's Historical Group in 1977.

A report of the discovery was in the PSNS newsletter for June 2018 which can be read here which is panning to exhibit the find in the  near future.

With thanks to Paul Adair, Collections Officer, Culture Perth and Kinross, Perth Museum & Art Gallery for alerting BPH to this find and for the images.