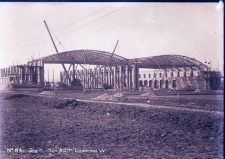 An appeal has been launched after a donation of near 90-year-old negatives depicting the construction of one of  RAF Henlow airbase. A base spokesman said: “We would dearly like to reunite these rare photographic examples and bring the whole collection together. We are appealing to you to search your attics or your garden sheds to see whether you can help us to reconstitute the collection and help us to properly celebrate the illustrious heritage of RAF Henlow.”

The donated pictures help bring to life the building of the base and date back to WW1, however a specific year is unknown. David Lloyd George’s government decided to construct repair depots, soley for the then Royal Flying Corps, and Henlow was selected as a site in 1917. Much of the station was under construction when the Royal Flying Corps became the Royal Air Force the following year.

In the original list of RAF stations in April 1918, Henlow counts among only seven other stations that remain open as British bases today. Parish councillor and local history enthusiast Michele Joy urges residents to be on the look out for the remaining negatives, as they help shine a light on the base’s early days. She said: “It’s definitely worthwhile to say that glass negatives or something that could easily be thrown away because they’re not familiar to people these days. If you’re doing a house clearance then don’t get rid of anything that’s of definite interest to people and could be important to Henlow’s history.”

If you can help locate the missing negatives, or know someone who can, contact Denise O’Hara by post, at Building 105, RAF Henlow, Beds, SG16 6DN or by email, on shsa-ast@henlow.raf.mod.uk