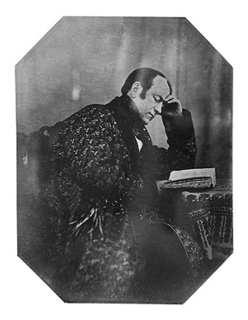 Among the first examples of daguerreotype in Russia, sent from Paris by Daguerre, were exhibited at the Academy of Arts in autumn of 1839. After Daguerre announced his discovery that year, crowds of people gathered in front of display cases of art stores in Moscow and Saint Petersburg in the hope of seeing pictures created with the light of the sun. The devotees of this new technological achievement, busily occupying themselves by experimenting with daguerreotype plates, were not deterred by the expensive materials, or by their rarity in Russia. The sales of cameras and plates were sold by intermediaries, usually optometrists; Schedel in Saint Petersburg and the Beckers brothers in Moscow. In October of 1839, Beckers placed daguerreotype views of Moscow in his store’s display case, having put their production on firm commercial basis.

A Davinion’s studio enjoyed great popularity in Petersburg, where portraits of the Decembrists S.G. Volkonskiy, I.V. Podzhio, N.A. Panov and P.A. Muhanov were made, among others. The peak of daguerreotype portraiture also includes the work of I. Veninger, who aspired to express certain spiritual conditions in his art; melancholy reflection and dreaminess. In 1850, daguerreotype portraiture was still in higher demand than paper printouts, but it fell into neglect soon after. Sergey Levitzkiy, the last significant master of daguerreotype, is represented at the exhibit by complementary portraits, diverse in their composition and plastic solution.

You can view these and more at this exhibition entitled The Age of Daguerreotype. Early Russian Photography - the first exhibit ever at the Hermitage to explore such an interesting and ultimately vanished phenomenon as daguerreotype, as well as the stages of its development, so widely and deeply. The curator of this exhibit is Natalya Yurievna Avetyan, academic associate and custodian of the photography collection of the Photography Fund of the Department of Russian Culture of the State Hermitage. Details can be found here.

Photo: Self-portrait by Aleksey A Bobrinskiy, 1842