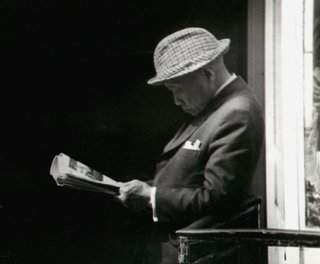 Although more than a thousand of my Autumn 1981 Britain-taken photos went missing between 1981 and mid-1987, I still have enough of my Britain-taken images in my possession for a decent portfolio of work. Included in that portfolio are quite a few environmental portraits I took around London that Autumn. (I have been able to hold onto nearly all my photos taken from mid-1987 forward.)

I wish I still had my portraits of London housemate Pinkie Virani (a noted Indian author and human rights advocate now) and Calvin Lawrence, my London roommate, who now edits abc.com in New York City.

Environmental portraits I took in 1981 London that I still own copies of include: Jim, a then-unemployed court porter by a statue of Samuel Johnson and a taxi; a Dustman smoking on the job; a Guitar Busker playing across from Covent Garden; a Homeless Man coughing at Charing Cross; an Anglo-Asian Man reading in Soho; and a Woman looking through the window of a blue van at an outdoor market.

These six mentioned portraits may not seem spectacular at first, but they are honest-enough images of everyday people involved in everyday life. I hope you see merit in these portraits of people, which are candid, or in the cases of Jim and the Dustman, spontaneously posed, all in natural settings.