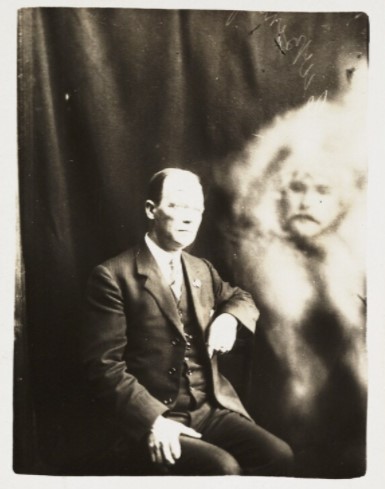 During the opening decades of the 20th century, William Hope was a well-respected medium among the spiritualist community in Britain, with positive endorsements from major scientific figures such as the chemist William Crookes and the author and physician Arthur Conan Doyle. He was often seen as one of the few mediums to be able to produce authentic spirit photographs.

However, all that changed in late February 1922 when a team of investigators led by the famous British psychical researcher Harry Price claimed to have caught Hope cheating during one of his sittings and discovered that he was swapping blank photographic plates with ones containing existing images that appeared to be depictions of spirit entities. Hope was publicly exposed as a fraud, and what ensued was a major debate between believers and sceptics over the legitimacy of the medium’s alleged spirit photography.

Using surviving materials from the Senate House Library and Science Museum Group collections, including photographs, private correspondence, published sources and camera technologies, this talk will explore this story, and reflect on what makes for trustworthy evidence in investigations of extraordinary phenomena.

The talk will be given by Dr Efram Sera-Shriar and will be hosted by the National Science and Media Museum, both live and online. It is free but registration is needed.