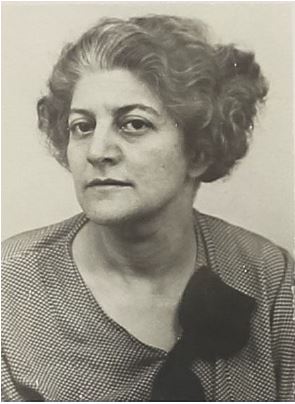 Gertrud (Gerty) Simon (1887-1970) was a prolific and successful photographer. Her photographs were presented in a number of exhibitions in Berlin in the late 1920s and early 1930s. Gerty Simon worked first in Weimar-era Berlin, where it seemed likely from the identity of her subjects that she had connections with the thriving and innovative creative scene of actors, writers, composers, dancers and artists there, as well as with the world of politics. She photographed the likes of singer and actress Lotte Lenya, theatre critic Alfred Kerr and his young daughter Judith, the artist Käthe Kollwitz and Albert Einstein.

Gerty Simon and her son Bernard fled the Nazi regime in 1933 and settled in Britain. Very quickly, Gerty Simon was able to re-establish her photography studio and create a reputation for photographing subjects from the most influential circles of London society. Between 1934 and 1937, she photographed amongst many others: Sir Kenneth Clark, Peggy Ashcroft and Aneurin Bevan. Her work also featured in a number of exhibitions, including London Personalities held at the Storran Gallery in Kensington in 1934. The Sunday Times described her at this time as “most brilliant and original of Berlin photographers”.

The quality of the photographs and significance of many of Gerty Simon’s sitters, as well as her story of displacement from Germany and re-establishment in Britain meant that, for The Wiener Library – the world’s oldest collector of material on the Nazi era – this was a particularly compelling collection. This project will bring into focus, for the first time in eighty years, the work of this powerful and innovative photographic artist, particularly as Gerty Simon photographed so many important cultural figures from the lost world of Weimar Berlin. We hope that through this exhibition and the accompanying catalogue focusing on her life and work, Gerty Simon will once again receive the recognition she deserves.

This exhibition is part of Insiders/Outsiders, a nationwide arts festival taking place from March 2019 to March 2020 to celebrate refugees from Nazi Europe and their contribution to British culture.