Exhibition: Empire through the Lens: Pictures from the British Empire and Commonwealth Collection / from 30 September 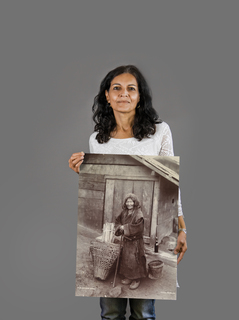 An exhibition examining the British Empire through photography will open at Bristol Museum & Art Gallery opened on 30 September. From 500,000 photographs and 2,000 films in the collection, 27 people were asked choose just one each and explain their choice in their own words.

The 27 selectors reflect the range of the collection: they include academics with an interest in colonial history, film or photography, artists, photographers, film makers, people who worked in the colonies and their family members, people working in development projects today, and members of local communities with a link to the old Empire. Each selector, with their background, brings a different perspective to how they ‘read’ their image and the legacy of Empire.

The British Empire & Commonwealth Museum collected photographs and film from people who worked in the Empire, their families, and companies and government departments working with the colonies. Some are from well-known people, such as the writer Elspeth Huxley, others from anonymous photographers working for organisations like the Crown Agents.

Some record great historical events, but many document the everyday lives of families living and working abroad. It is a fascinating collection, giving a broad view of the Empire and the early years of independence.

Sue Giles, senior curator for world cultures said: “The 22 images and films on display cover 100 years of the British Empire and Commonwealth, from 1860 to the 1960s. The selectors are sometimes nostalgic, often critical and always reflective. They comment honestly on how they saw the Empire and the legacies of Empire. This exhibition is exciting for us because it’s the first time that material from the BEC collection has been displayed since it was transferred to Bristol City Council.”

Whilst the images on the walls are copies, many of the originals will be displayed in the gallery.  There are single prints, photographs mounted in albums, negatives and transparencies.  A couple have been heavily reworked, in the days before Photoshop existed, although most are unretouched.

This exhibition developed from a project to catalogue the huge number of photographs and films in the British Empire & Commonwealth Collection, to make them more accessible via the Bristol Museum & Art Gallery website.

The cataloguing project was only possible thanks to a grant from the National Cataloguing Grants Programme for Archives, administered by the National Archives.  This paid for two archivists to survey and start cataloguing the extensive collection.

Empire through the Lens: Pictures from the British Empire and Commonwealth Collection