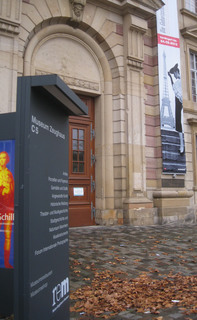 The Birth of Photography: Highlights of the Helmut Gernsheim Collection, is a special exhibition at the Reiss-Engelhorn-Museen Mannheim’s Forum Internationale Photographie (FIP), and showcases two centuries of the history of photography. In homage to the ground-breaking photographer Helmut Gernsheim (1913-1995), the exhibition on the occasion of his 100th birthday reunites both parts of his one-of-a-kind collection of photographs for the first time in half a century. One of the most exceptional highlights of the history of photography will be on display – the “first photograph in the world”, a landscape photograph taken by Joseph Nicéphore Niépce in 1826.

With a total of 250 objects, the exhibition which opened on 9 September 2012 and extended to 24 February 2013 takes an unprecedented look at 19th and 20th century photography and its different stages. Visitors can follow the development of photography from the first daguerreotypes to the Victorian era up through masterpieces by contemporary photographers, which shape our collective visual memory. This exhibition is a collaborative undertaking between the Reiss-Engelhorn-Museen Mannheim and the Harry Ransom Center at the University of Texas in Austin, which houses the historical part of the Gernsheim collection.

Thanks to their collaboration, the 'first photograph' will be exclusively on display on European soil again for the first time since 1963: The first outdoor photograph in the world, the heliograph “View from the Window at Le Gras” by the Frenchman Joseph Nicéphore Niépce in 1826. After being displayed in an exhibition at the Crystal Palace in Sydenham in 1898, the work was thought lost for over five decades. Helmut Gernsheim spent years investigating the picture’s trail until he finally tracked it down in 1952 in a steamer trunk stored in London. This sensational discovery enabled Gernsheim to date the birth of photography thirteen years earlier than 1839, accepted at that time as the year of photography’s invention.

The exhibition will present other significant works from the historical portion of the Gernsheim collection, including some of the earliest daguerreotypes such as Louis Jacques Mandé Daguerre’s picture of “Notre-Dame and the Île de la Cité, Paris” made around 1838. Visitors can look forward to a journey through the currents of 19th century photography: from artistically oriented pictorialism to early war reporting up through nascent travel photography.

In addition to pictures from photography’s infancy, the show will present numerous icons of contemporary photography, arranged thematically: Works of nude, architectural, travel, urban, landscape and portrait photography will be on display, as will experimental and journalistic pictures by world-famous photographers. This one-time reunion of works from Gernsheim’s historical and contemporary collections in one comprehensive show will provide visitors to the exhibition fascinating insights into the nearly two hundred year history of photography.

The exhibition “The Birth of Photography: Highlights of the Helmut Gernsheim Collection” is being organized by the Reiss-Engelhorn-Museen Mannheim and the Harry Ransom Center at the University of Texas in Austin. A richly illustrated catalog will be published by Kehrer.

The exhibition is accompanied by a German/English catalogue by REM curator Dr Claude Sui.