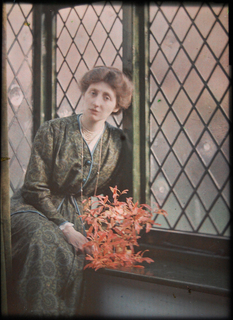 Although relatively unknown, Olive Edis was one of the most important photographers of the first half of the twentieth century and the first-ever accredited female war photographer. The breadth of her subjects from British royalty and aristocracy to the craggy faces of the fisherman of north Norfolk, together with her highly atmospheric photographs of the battlefields of France and Flanders taken during her time as an official World War One war photographer, raise her to international status.

The exhibition Fishermen & Kings: The Photography of Olive Edis is part of the on-going Olive Edis project (see notes to editors), which aims to share with the world and boost awareness of Edis’ inspirational life and work. Curated specially for Norwich Castle, the show will not be travelling, although a smaller exhibition featuring different images will form part of the permanent display at the Cromer Museum in the future.

Curator Alistair Murphy, said: “Olive Edis was a remarkable woman. She was well-educated, forward thinking, a visionary, an astute business entrepreneur and most importantly a talented photographer with a natural affinity for her subjects – however grand or humble each was afforded respect and dignity. Like the many influential and inspirational women that she photographed, Edis was herself a “new woman”. Edis’ photographic legacy is a ‘national treasure’ and we are delighted to present, for the first time, this highly impressive display of her work, to be appreciated by a larger audience.”

The exhibition features more than 190 rare photographs taken by Edis between the years of 1900 and 1955.  The work is presented thematically starting with an introduction to Olive Edis and then focusing on her unique photographic technique and technical expertise. Another section examines her skill in portraiture, which offers a rare glimpse into both high society of the day and the more simple life of East Anglian fisherman. Influential women in the early twentieth century, is another key element. As an entrepreneur and ground-breaker Edis herself was a “new woman”. Not only did she exemplify the emancipation of women and their changing role in society in her own life, she also recorded it. In addition Edis’ remarkable war work provides another important theme.

One of the earliest examples of her work is a portrait of her cousin Caroline ‘Carrie’, taken in 1900. Poignantly, it was apparently Carrie who gave Edis her first camera. The original photograph was donated by Edis to the National Portrait Gallery collection in 1948 and has a hand-written inscription on the back - "My very first attempt at a portrait which turned my fate in 1900”.

Another early photograph shows Edis’s twin sisters, Emmeline and Katherine. It was Katherine who initially shared her older sister’s passion for photography and the two of them set up a photographic studio in Sheringham in 1905, although Katherine’s photographic career ended when she married a few years later.

As to why Sheringham was the choice of location is unknown. It has been suggested that Edis and her sisters spent holidays in North Norfolk as children. Edis’ great uncle John had also retired to Sheringham, which may also explain the choice. The first studio on Church Street in Sheringham, was designed by their uncle, the architect Col. Sir Robert Edis, with a glass roof to allow plenty of natural light. Olive later moved to the “New Studio” on South Street.

Edis’ reputation as a photographer grew rapidly and within a few years she already had an impressive list of sitters and commissions. An early self-portrait taken in around 1912 shows Edis as an elegant, rather demure, thoughtful young Edwardian lady gazing directly into the camera lens. She became a member of the Royal Photographic Society in 1913 and the following year was elected a fellow. With studios in Sheringham, Norfolk and later Farnham in Surrey and Ladbroke Grove London, she was something of a photographic entrepreneur quick to recognise the importance and potential of this new technology.

Over the course of her 50-year career, Edis photographed a huge cross section of society. Her signature style, which used natural light and shadow, resulted in striking portraits. Notable are her sensitive, natural photographs of Edward VIII as Prince of Wales and a young Prince Albert (later George VI). It is not known where the photographs would have been taken, possibly in Edis’ London studio. Edis also photographed several other members of the Royal Family including HRH The Duke of Edinburgh, as the young 15-year old Prince Philip of Greece, in addition to his uncle Lord Mountbatten, later 1st Earl Mountbatten of Burma (the latter is not included in the exhibition).

As a forward-thinking, progressive, independent woman, it is no surprise that she also photographed several members of the suffragette movement including Emmeline and Christabel Pankhurst, as well as Britain’s first woman doctor and women’s rights campaigner, Elizabeth Garrett Anderson.

Alongside the portraits of the well-to-do in society are a vast number of wonderfully compelling portraits of local Norfolk fisherman, the salt seemingly etched into the lines of their craggy, characterful faces.  The fishermen remained a favourite subject throughout her career.

Edis had the ability to put all her subjects at ease. She put her success down to “being in sympathy” with her sitters and as a result was able to capture a true and informal likeness.

In 1918, Edis was commissioned by the Imperial War Museum to photograph women’s war work in Europe. She was the first British woman to be commissioned as an official war photographer and only the 5th official British photographer to visit Europe to cover WW1.

Despite her trip being delayed due to the precarious military situation, and some opposition to sending a woman to photograph a war zone, in March 1919 she embarked on a month long journey around France and Belgium with Lady Norman, Chair of the Women’s Work Committee.  Edis kept a journal of her travels through war-torn Europe, and this combined with her many photographs, taken using a large glass-plate camera, provide graphic, documentary evidence of the lives of women in the British Women’s Services who worked on the front lines. Atmospheric photographs also capture the devastation that followed the Great War. Many of these photographs now form part of the Imperial War Museum’s collection.

Edis was able to turn her lens to any form of photography, as well as her portraiture and historic war photography, she is credited with having taken some of the earliest colour photographs ever taken of Canada as part of a commission to advertise the Canadian Pacific Railway in 1920. Very few examples of these photographs survive today and none are included in the exhibition. Another important commission was to take interior shots of No 10 Downing Street in 1917.

The photographs reveal the technical development of Edis’ work. Initially working with platinum prints, she was also one of the first photographers to experiment with autochrome photography and even patented her own design of autochrome viewers, termed diascopes.  In addition Edis was one of the first professionals to use a “kinematograph camera” – she started making films in the 1920s, including filming the wedding of Mr Henry Deterding of Holt, and a film of the Netherlands entitled “Life on the Waterways”, sadly both now lost.

Edis’ passion for photography was undiminished and throughout her career, she maintained her photographic bases in Sheringham and London, splitting her time between the two and driving to and from London in her Austin 7. Despite advances in photography she continued to use her large glass plate camera right up until the 1950s, although she did later own folding cameras which used film.

The last photograph of Edis was taken in 1953/4 by Cyril Nunn, her close friend and collaborator, on her own glass plate camera. Olive Edis died in London in 1955.

It was to Cyril Nunn that Edis left her estate of photographs, prints, glass plate negatives and autochromes. This was in turn offered to the Cromer Museum in 2008 and was purchased with help from the Heritage Lottery Fund, the V&A Purchase Grant Fund, North Norfolk District Council and Friends of Cromer Museum. This material, including around 1800 plate glass negatives, provided the impetus for the Olive Edis project. Cromer Museum now has the largest holding of Olive Edis negatives in the world and is a focus for further research and the promotion of knowledge and interest in her life and work.

Notes on the book accompanying the Norwich exhibition: