Exhibition: No Man's Land: Women's Photography and the First World War / from 7 October 2017 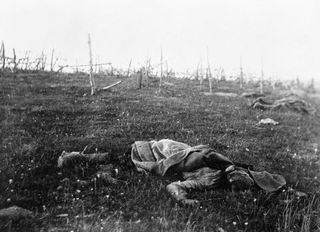 Highlights include photographs never-before-exhibited frontline images by nurses Mairi Chisholm and Florence Farmborough; photographs by Olive Edis, the UK’s first female official war photographer; and new work by contemporary photographer and former soldier Alison Baskerville. This is the premiere of the nationally-touring exhibition before it travels to Bristol Cathedral, The Turnpike in Leigh, and Bishop Auckland Town Hall.

Unconventional motorcyclist-turned-ambulance driver Mairi Chisholm (1886–1981) set up a First Aid post on the Western Front with her friend Elsie Knocker. Using snapshot cameras, they recorded their intense life under fire at Pervyse in Belgium, just yards from the trenches. The images on display in the exhibition, drawn from Chisholm’s personal photo-albums, record her vitality and humour in the midst of great suffering.

Pioneering Olive Edis (1876–1955) is thought to be the UK’s first female official war photographer, and one of the first anywhere in the world. A successful businesswoman, inventor, and high-profile portraitist, Edis photographed erveyone from Prime Ministers to Suffragettes. During the Armistice, she was commissioned by the Women’s Work Subcommittee of the Imperial War Museum to photograph the British Army’s auxiliary services in France and Flanders. Edis took her large studio camera on the road, often developing plates in makeshift darkrooms in hospital x-ray units. Her skilfully-composed images show the invaluable contributions of female engineers, telegraphists, commanders and surgeons.

On the Eastern Front, nurse and amateur photographer Florence Farmborough (1887–1978) documented her incredible experiences with the Russian Red Cross on the border of Galicia (present-day Ukraine and Poland). At a time when the British press avoided explicit images, Farmborough depicted the horrific consequences of war, including corpses lying in battlefields. Her images of Cossack soldiers, makeshift field tents, and Christmas in an old dug-out, offer rarely-seen views of the Eastern Front before Farmborough fled the Bolshevik Revolution in 1917.

Contemporary photographer Alison Baskerville is a former soldier with an insider’s perspective on women’s experiences in the armed forces. With Soldier ,  a new commission made specially for No Man’s Land , Baskerville has been directly inspired by Olive Edis to make a series of portraits of present-day women in the British Army. Working in collaboration with Ishan Sadiq, Baskerville has produced a series of digital autochromes — a contemporary version of the early twentieth-century colour technology pioneered by Olive Edis. Presented as lightboxes, the portraits have a distinctive hazy appearance, made up of thousands of tiny coloured dots that glow.

Contemporary artist Dawn Cole was inspired by the chance find of a suitcase in the attic of a family house, discovering the photographs and diary of her great-aunt Clarice Spratling, a Voluntary Aid Detachment nurse in Northern France. Cole uses a many-layered technique incorporating photo-etching, digital manipulation and lace-making. She ‘weaves’ words from Clarice’s diary entries into images of lace-edged handkerchiefs and collars, creating photographic prints with hidden messages that explore the gulf between public face and private feelings.

Shot at Dawn by contemporary artist Chloe Dewe Mathews focuses on the ‘secret history’ of British, French and Belgian troops who were executed for cowardice and desertion between 1914 and 1918. Her large-scale colour photographs depict the sites at which the soldiers were shot or held in the period leading up to their execution. All are seasonally accurate and were taken as close as possible to the precise time of day at which the executions occurred. Made a hundred years later, her images show places forever altered by traumatic events.

Dr. Pippa Oldfield, Head of Programme at Impressions Gallery and curator of the exhibition , says, “Most people think of war photography as images of male soldiers, made by photojournalists in the combat zone. However, the work in No Man’s Land shows many other ways to photograph war, offering different viewpoints by women who have historically been excluded. I hope visitors will be moved and surprised by what they see”.

Alison Baskerville, exhibiting photographer, says “It’s a privilege to be exhibiting alongside such inspiring and fascinating women. Despite the distance of a hundred years, their images are still so raw and powerful. As someone who has served in Afghanistan, I recognise the challenges of being a women in a war zone, and the importance of sharing that story”.

No Man’s Land is curated by Dr. Pippa Oldfield and is a co-production by Impressions Gallery, The Turnpike, Bristol Cathedral, and Bishop Auckland Town Hall, supported using public funding by the National Lottery through Arts Council England.

The exhibition is supported by Paul Mellon Centre for Studies in British Art and Peter E. Palmquist Fund for Historical Research. Historical images are kindly provided by National Library of Scotland; Imperial War Museums, and Norfolk Museums Service. Soldier by Alison Baskerville is commisioned by Impressions Gallery.  Shot at Dawn by Chloe Dewe Mathews is commissioned by the Ruskin School of Art at the University of Oxford as part of 14–18 NOW, WW1 Centenary Art Commissions. No Man’s Land is a member of the First World War Centenary Partnership led by IWM (Imperial War Museums).

I don't think this makes clear that the exhibition is at the Impressions Gallery, Centenary Square, Bradford, West Yorkshire, England, BD1 1SD.