The exhibition is devoted to the 180th anniversary of the official invention of photography. More than 70 exhibits, the majority of which are going on display for the first time, tell about the historical development of photographic processes from the 1840s through to the 1910s – the period of the most intensive technical experimentation and creative exploration.

The items included in the exhibition demonstrate the variety of photographic techniques, including both unusual ones – pictures on calico and on porcelain – and others that were fairly popular in their time but are rarely found today in Russian museum collections – the tintype (also known as ferrotype), ambrotype and cyanotype.

Visitors will be able to acquaint themselves with a precursor of photography – the Physionotrace, a means of producing portraits using a special optical device that was exceptionally popular in the late 18th century. It is possible to compare the appearance of likenesses created by that means with the first photographic portraits – daguerreotypes, made on copper plates coated with silver and named after their inventor, Louis Daguerre. It should be noted that the State Hermitage’s collection of daguerreotypes is one of the world’s finest with regard to the state of preservation. 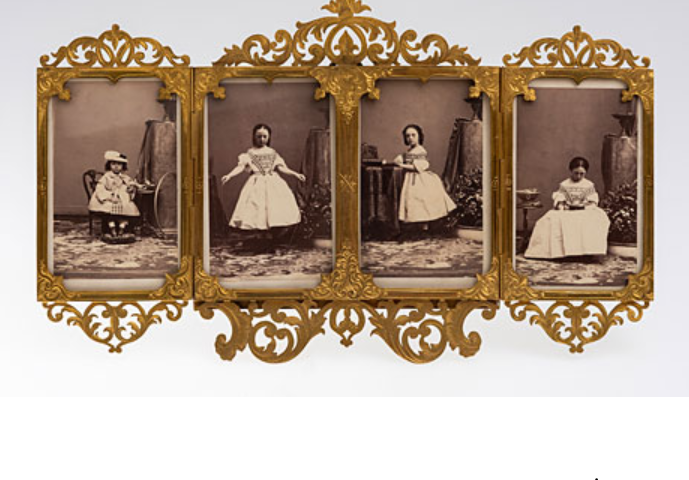 Following the invention of the daguerreotype, the next advance that shaped the further development of photography was the introduction of the negative-positive process of obtaining images. It was proposed by the English scientist William Henry Fox Talbot and became known as the talbotype or calotype. Original prints on salted paper – a Portrait of a Woman by an unknown photographer and Cedar of Lebanon by Ernest Benecke – clearly indicate the shortcomings inherent in that early technique.

The variety of genres that arose in the first 30 years of the existence of photography can be appreciated in pictures made by both Russian and foreign practitioners. The genre that was most popular and most in demand was the portrait: the exhibition presents the most common portrait formats, such as the carte de visite or larger cabinet card, and rarer ones, for instance the mignon.

A separate theme within the exhibition is formed by photographs of works of art – photographic reproductions, one of the chief aims in the creation of which was the desire to learn how to convey and preserve the original colours. The display includes one of the earliest colour images of this sort made by the French photographer Léon Vidal. The level of skill and training of museum photographers of that period can be judged from the works of Feodor Nikolayevsky, the first official photographer of the Imperial Hermitage.

After starting off as a means of precisely recording the world, photography gradually evolved its own artistic language and became an independent art form. That aspect is represented by such masters of artistic photography as Baron Wilhelm von Gloeden, Jan Bulgak and Vasily Sokornov.

At the turn of the 20th century, the genre of photographic reportage developed apace. All the fleeting and unusual events of the day became the object of the fixed attention of photojournalists. Sports competitions, natural disasters, the incidents of city life are shown in pictures taken by photographers in both this country and Europe. In Russia the founding father of reportage photography is justly considered to be the St Petersburg photographer Karl Bulla. “I shoot anywhere and everywhere, under any conditions” – the motto of this pioneer became a slogan for all subsequent generations of photojournalists.

The appearance of new light-sensitive materials and the shift to mass production of them in factories, as well as the invention of lightweight portable cameras, made photography accessible to an extensive body of amateurs. Contemporaries described those enthusiasts’ tendency to photograph everything that caught their eye with a great deal of irony, while horrified professionals debated the “epidemic of picture-taking”. The exhibition includes several amateur snaps, probably taken during the unknown photographer’s summer holiday.

By the last decade of the 19th century, photography had completely conquered the world as an inexpensive and readily available means of producing pictures. Methods of reproducing photographs in large numbers without loss of quality by printing press came into widespread use. An example of such high-standard output is provided by a phototype View of Reval.

The most democratic form of photographic image in the late 19th and early 20th centuries was the picture postcard, which besides its immediate function also served as a means of advertising, propaganda or education depending on the nature of the image. The examples included in the display demonstrate the variety of subjects found on postcards.

The exhibition also includes several examples of cameras and optical devices that make it possible to trace the improvement of the optical and mechanical components of the photographic process. A Kodak Vest Pocket camera from the collection of technical devices in the Department of the History of Russian Culture allows visitors to judge how convenient and refined cameras had become by the end of the period.

Admission is by free entrance tickets, during the opening hours of The Staraya Derevnya Restoration and Storage Centre (tickets must be purchased at the museum ticket offices).