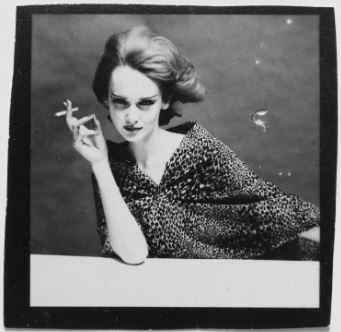 An exhibition of over 30 vintage photographs from Terence Donovan’s early career will go on display at Huxley-Parlour Gallery from 3-27 July. Donovan (1936-1996) rose to prominence in the 1960s as part of London’s post-war renaissance in art, fashion, graphic design and photography. Terence Donovan: The 1960s will showcase his best-known photographs from this period alongside some lesser-seen images to illustrate the scope of his work this formulative period.

The exhibition includes portraits of Julie Christie, Terence Stamp, Monica Vitti, Sophia Loren, Claudia Cardinale, Celia Hammond and Dave Brubeck amongst other cultural figures of the era, shot for a range of both advertising and editorial commissions. Also included are eight original and unique contact prints – small photographs made by laying the negative directly onto the surface of the light sensitive paper. Donovan meticulously reviewed his contact sheets, indicating his selected frames by piercing them with a pen or marking them with a pen or chinagraph pencil. He discarded the contact prints of the frames he did not want used, keeping only those that he felt good enough to print or publish. These prints provide an important insight into Donovan’s working methods and his creative process.

Charting Donovan’s early career from 1959, when he opened up his first London studio, to the heights of his success throughout the 1960s, the works in the exhibition show how he helped to redefine photography and shape the aesthetic of London’s ‘Swinging Sixties’. The honesty and energy of Donovan’s photographs quickly helped to establish his own visual language rooted in the world he knew best – the streets of London’s East End, where he had grown up. Often situating his models in bomb-ravaged ruins or in industrial building sites, his gritty and noirish style looked to reportage, rather than fashion photography, for its inspiration. He worked for some of the most progressive magazines of the time including Queen, Town and London Life and his images quickly became emblematic of the era and established Donovan as a new force in British photography.

Terence Donovan was born in London’s East End in 1936. At the age of 22, he opened his first studio in London, becoming an immediate success. He worked for leading advertising agencies and fashion and lifestyle magazines including Vogue, Harper’s Bazaar and Elle. Later in his career he produced television commercials and advertising campaigns alongside editorial work for cutting edge magazines and newspapers, most conspicuously the now-legendary Nova magazine. He also directed the video for Robert Palmer’s song Addicted to Love (1986). His work has been the subject solo exhibitions at the Museum of London and The Photographers’ Gallery, London, and group exhibitions at the V&A, London; FOAM, Amsterdam; National Portrait Gallery, London and Cincinnati Art Museum amongst others.