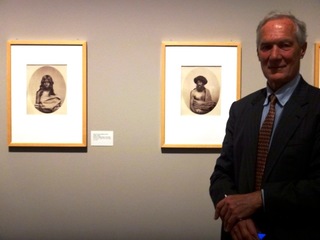 Christopher Penn writes...There is an interesting and beautifully displayed exhibition of photography - largely portraiture - from India in the nineteenth century running now in the Art Library for Photography in Berlin. Among other works it includes four Samuel Bournes, nine Bourne and Shepherds and eight Penns including 'Toda Man (Nicholas/Penn 48)' and 'Toda Woman (Nicholas/Penn 49)', as you will also see in the photo here. Some of the attributions are a bit weak, including three other Penns and two photographs attributed to Nicholas; but that is a small criticism of the first exhibition to dig deep into the extensive collection of ethnographic prints in Berlin.

The fine catalogue, in which a large number of the photographs are reproduced, includes an article by John Falconer, based he says on early research, which provides a good lead into the exhibition, and other articles largely related to the colonial theme.  The exhibition is well worth a visit.

The exhibition runs until 21st October.

One of the world's most comprehensive and significant collections of portrait photography from India is on exhibit for the first time. The collection was originally thought to be lost during World War II, only gradually returning to Berlin's National Museums beginning in the 1990s.

Now, around 300 photographs from the second half of the nineteenth century offer a comprehensive overview of portrait photography from the Indian subcontinent. In addition to pictures by renowned photographers and studios such as Samuel Bourne, Sheperd & Robertson, A.T.W. Penn, and John Burke, works by lesser known artists are also on display. Popular and unexpectedly diverse ethnographic photography of the time stands in contrast to stylised street shots of artisans, as well as portraits of nobility, including Islamic princes and princesses, Maharajas, and clan leaders, taken in their own palaces or in artfully set studio scenes.

One unifying aspect of many early portraits is a particularly European view - "The Colonial Eye". In the second half of the nineteenth century, in the name of science and colonialism, the land and its inhabitants were to be apprehended through observation and cataloguing, analysation and measurement. The fascination with India was especially evoked by the strange-looking indigenous peoples and the caste-system, as well as the splendour of the Indian nobility and the austere life of ascetics.

Photo: Christopher Penn with two of his ancestor's photographs in the exhibition.