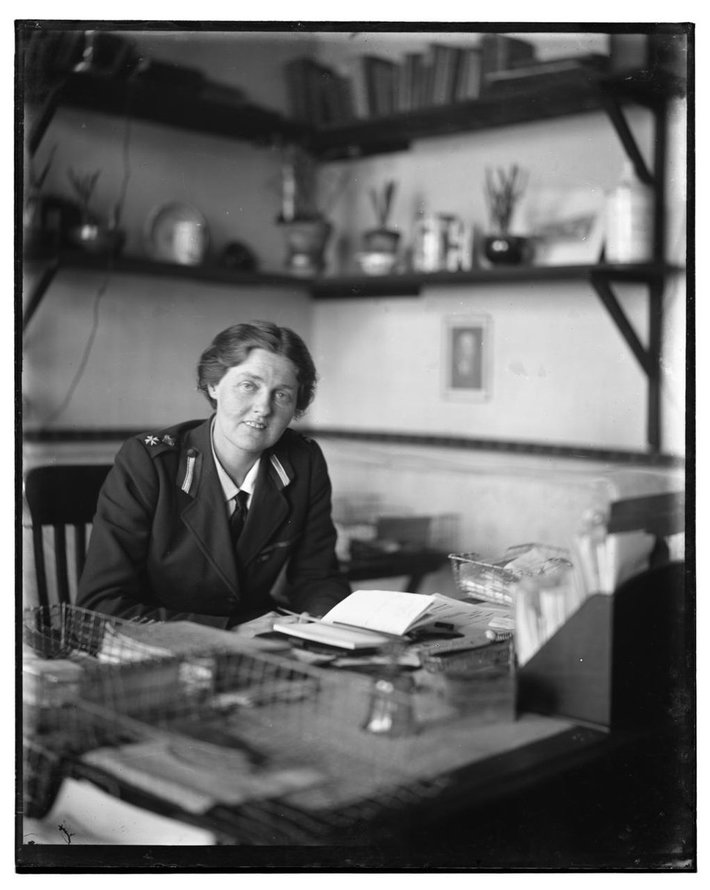 A touring exhibition highlighting the work of Norfolk photographer Olive Edis will head to Great Yarmouth’s library next month. It is the final stop for the touring display, The Road to Ypres: The War Photography of Olive Edis, which will be at the library from March 1-31. The new venue coincides with the centenary of when the photographs were taken by Edis.

The display was curated by Norfolk Museums Service staff at Cromer Museum and has been touring for two years, including stopping off at venues in Sheringham, King’s Lynn and Norwich’s Millennium Library.

Edis was approached in 1918 by the Imperial War Museum’s Women’s Work Sub-Committee and commissioned to photograph the work of the British Women’s Services in Europe. The trip was delayed due to a precarious military situation in 1918 and some opposition to sending a women to photograph an active war zone. However, in 1919 Edis travelled to France armed with her large plate camera, becoming the first British woman to be commissioned as an official war photographer. She was one of only five photographers commissioned to cover the First World War.

Throughout the journey she kept a fascinating diary of her adventures where she recorded the stories behind the photographs and her reactions to the destruction that she saw all around her. The touring exhibition features reproductions from the Cromer Museum collection as well as rarely-seen images from The Imperial War Museum and National Portrait Gallery. Images are accompanied by extracts from Edis’ war diary allowing the story to be told in her own words.

Councillor Margaret Dewsbury, Chairman of Norfolk County Council’s Communities Committee, said: “It’s fantastic that so many people have been able to see Olive Edis’ work as the exhibition has toured around Norfolk. The display at Great Yarmouth library is extra special as it coincides with the centenary of when the images were taken. It’s the last chance for people to go along and have a look at this thought-provoking display in Norfolk.”

As 8 March is also International Women's Day, Great Yarmouth Library is also hosting a celebration event, in conjunction with Great Yarmouth Soroptimists and GROS. The event will showcase the work and achievements of women across the borough and beyond. There will be speakers, stories, music, poetry and lunch. The event runs from 10am to 2pm and is free but ticketed.

An exhibition at Norwich Castle and the permanent Fishermen and Kings: The Photography of Olive Edis gallery at Cromer Museum have allowed thousands of people to explore her work. The Cromer gallery can be accessed from April when the museum re-opens for 2019. Find out more about the permanent display via the Norfolk Museums website.

There is also currently a display featuring more than 60 photographs called Olive Edis: Photographer at Ancient House Museum of Thetford Life. This includes items borrowed from Cromer Museum and the National Portrait Gallery.

Oliver Bone, Curator said: “Olive Edis was a remarkable woman. She was well-educated, forward thinking, a visionary, an astute business entrepreneur and most importantly a talented photographer with a natural affinity for her subjects – however grand or humble each was afforded respect and dignity."

As well as her work on the First World War, Edis was an early exponent of the autochrome, winning a medal for her Portrait Study in the 1913 Royal Photographic Society Annual Exhibition. She became a Fellow of the Society the following year, one of the first women to do so. The exhibition 'Women in Photography: A History of British Trailblazers' at the Lightbox in Woking features three of her autochromes as well as two platinotypes of WW1 scenes. The exhibition runs until 2nd June.