Exhibition: Through the Colonial Lens: Photographs of 19th and 20th Century India 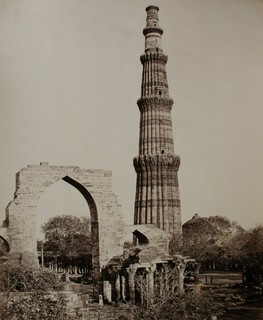 Through the Colonial Lens will feature more than 70 images, looking at the history of photography in India from its early adoption dating from the 1840s through the early 1900s and will explore themes of the subjective view, consumption of images and photography’s growing prominence over earlier forms of visual media. Drawing from local private collections, Through the Colonial Lens will feature the work of both amateur and professional photographers of the late 19th and early 20th centuries, including Samuel Bourne, Lala Deen Dayal, Edward Lyon and John Murray.

Each photographer exhibited in Through the Colonial Lens responded in varying degrees to the dual demands of their artistic eye and professional duties, whether Captain E.D. Lyon in south India, a British military officer tasked with documenting a historic site, or Lala Deen Dayal (1844-1910), a professional photographer with a studio in Mumbai. Samuel Bourne (1834-1912), along with others, brought his idea of the ‘picturesque’ with him from Britain to many of the images he took in India, a concept steeped in the Romanticism of 18th-century Europe.

The Victorian era’s emphasis on the role of science and technology, specifically natural history, led to a seeming mania for taxonomy. This urge to classify newly encountered phenomenon can be seen in the development of photography in the subcontinent. Military officers such as Captain Thomas Biggs and Captain Linnaeus Tripe were given reassignments from their military duties in order to photo-document local architecture, which provided key information to the newly-formed Archaeological Survey of India. Photography was understood to be closely linked to other scientific pursuits, with doctors in the British military, such as Dr. John Murray and Dr. William Henry Pigou, as early enthusiasts. Efforts to provide comprehensive photography of a wide swath of the diverse population of India were closely tied to the nascent fields of anthropology and ethnography.

Further information can be found here, and details of the exhibition here.