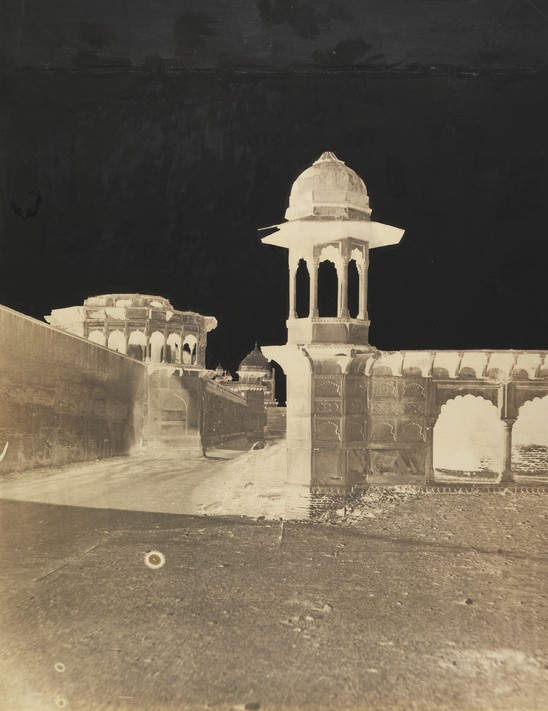 Photography had made a breakthrough in British-dominated India in the early 1850s. With its magnificent architecture, exotic landscapes, and many different peoples and cultures, India offered fantastic motifs: splendid Islamic palaces, mosques, and sepulchral monuments. Princes, maharajas, ministers, and warriors in all their glory. But also an abundance of life among the common people, with everyone from stonemasons to snake charmers as well as elephants bathing in the Ganges.

Motifs of a completely different type that can be seen in the exhibition are those of the shattered palaces and dead warriors that spoke admonishingly of the rebellion against British rule in 1857-1858. The rebellion broke out after Muslim and Hindu soldiers had been forced by the British to use cartridges supposedly greased with fat from pigs and cows. These are some of history’s earliest war photographs, which in Europe served as the basis for newspaper illustrations.

The photographs were often taken under difficult working conditions. The heavy photo equipment had to be transported to distant regions along impassible roads, and its chemicals dried out in the tropical heat. The exposure time could be very long, and processing the negatives and the positives was often arduous. Experiments were made with the new media by both visiting and local photo pioneers. The exhibition bears witness to the exchanges and competition between amateurs and the professional photographers whose studios popped up in innumerable places in India in the years up to 1900. The photographs also show how the new medium developed in the tension field between documentation and creative art form.

The over 80 works in the exhibition comprise photographs and photo albums, all of which were lent by the same private collection. The exhibition catalogue was written by the British photo historian John Falconer, who for many years was responsible for the photograph collections in the British Library’s Indian and Oriental departments. The author is one of the world’s leading specialists in this field and his catalogue provides a detailed and lively account of the photographers’ India in the 19th century and their photographic techniques.

The catalogue is available in both Danish and English editions and can be purchased in the museum shop for DKK 200. Read the press release from Strandberg Publishing for the publication here.