In a ceremony at Kensal Green cemetery today, Saturday, 1 May 2010, Frederick Scott Archer was honoured with the unveiling of a plaque on his grave. In addition, those present were able to see for the first time a surviving link to Archer with the re-erection of the original head stone recording his death that had long been lost. Also, John Brewer announced that photo-historians had incorrectly recorded Archer's death as 2 May 1857 when, in fact, he had died on 1 May 1857.

The event was organised by a group of artists called The Collodion Collective who started work on a plan to honour Archer and to put a headstone on his grave. Money was raised through the publication of a book World Wet Plate Collodion Day 2009. The group arranged a demonstration of the collodion process after the plaque unveiling and organised an exhibition of modern wet-collodion images on glass and on paper. 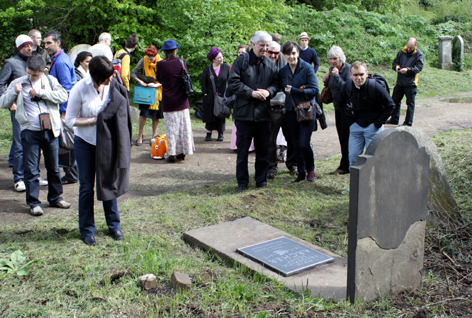 Brewer while researching Archer went back to his original death certificate to discover the correct date of his death. A number of historians including Helmut Gernsheim had relied on incorrect contemporary reports of his death was they incorrect ascribed to 2 May. The newly located headstone also correctly records Archer's date of death.

Archer by all accounts was buried in an unmarked grave but his death was subsequently recorded on the headstone of his sister, Sarah and brother, James who were all buried in the same plot. The headstone was hidden by vegetation and removed and was only discovered close by the plot as plans for the commemoration were made. It confirms Archer's correct date of death and his siblings. 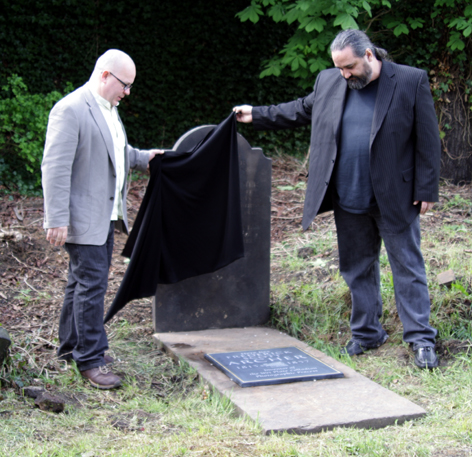 Finally, as I walked through the cemetary I spotted memorials to another photographic notable, the society portrait photographer Alexander Bassano (10 May 1829–21 October 1913)... Comment by Michael Pritchard on May 4, 2010 at 10:09
Richard Morris provided the following notes from his MPhil. The extracts are from the Photographic Journal:

Following the death of Frederick Scott Archer, photographers created a fund for his family to provide for them in their distress. John Dillwyn Llewelyn gave ten pounds. The Journal of the Photographic Society contained the following article on the 23rd of May 1859.

Archer Fund: it will be seen from the following statement, that the amount of subscription collected for the benefit of the family of the late Mr Archer is very nearly £740. Of the remainder £618.6s 9d has been invested by the direction of the Committee in consols in the name of Messrs Nathaniel Machin, Samuel Hansen Alfred Sweeting and Roger Fenton as Trustees of the orphan children. A small balance remains ....to the bankers, which it is hoped will yet become a considerable one; there are several subscriptions unpaid & there are no doubt many photographers whose names do not appear in the following list, who will yet put on record their sense of obligation to the late Mr Archer
W J Newton
Roger Fenton

As early as June 26th 1856, before Archer's death, the Photographic Society's Council minutes recall that letters were read

from Profr Dela Motte. proposing that the Council shd join in a public subscription for a Testimonial to Mr Archer.

On the question of a memorial to Lord Palmerston in favour of some public reward to Mr Scott Archer being discussed, Mr Fry was requested to assist the Secretary in drawing it up.

Comment by Michael Wong on May 1, 2010 at 20:49
Remembering Frederick Scott Archer
A write-up by the picture editor and photographer for the BBC News website on this special day can be found here: http://www.bbc.co.uk/blogs/photoblog/2010/04/remembering_frederick_...
Well done again to all at The Collodion Collective, especially Quinn Jacobson and Carl Radford for organising this event.