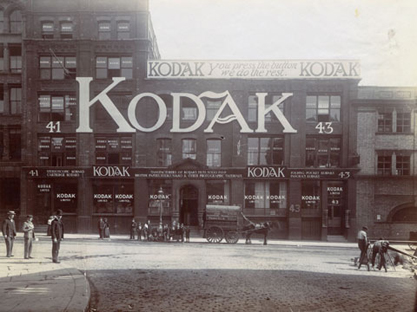 Kodak Ltd’s British company archives have been handed to the British Library and its research department’s library of important photographic journals to De Montfort University in Leicester.

The earliest items in the archive date back to 1885, when the Kodak Company – a subsidiary of the US-based Eastman Kodak Company – opened its first UK offices in Soho Square, London. It adds to the already outstanding photographic collections of the British Library, which hold around half a million photographs dating from the birth of the medium up to the present and which will be staging a major exhibition showcasing these collections in October 2009. 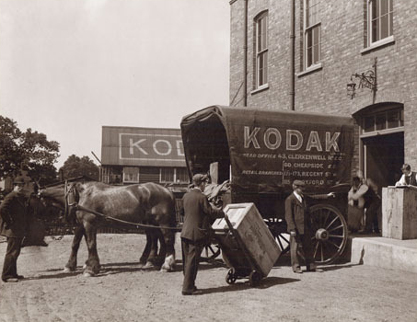 The archive includes financial ledgers dating back to the company’s earliest years in the UK, advertising photographs and original line drawings used in advertising campaigns, Kodak publications including catalogues, newsletters and calendars, correspondence and minutes of meetings, photographs of buildings and employees and research reports dating back to 1928. Books and journals from the archive, which are largely duplicates of items already held by the British Library, are to be donated to De Montfort University, Leicester, which is this year launching a Masters degree in Photographic History and Practice.

The archive was formed in 1977, when the holdings of the Kodak Museum (established 1927) were divided between items of significance to the history of photography generally and those relating to the history of the Kodak Company (The Kodak Ltd Archive). The former items – including photographs, photographic apparatus, products and processes – were donated to the National Museum of Photography, Film and Television at Bradford in 1985.

John Falconer, Head of Visual Materials at the British Library, said, “The Library is delighted to acquire such a significant collection as the Kodak Ltd Archive – which we will make available to researchers in our St Pancras Reading Rooms in perpetuity. It will form a unique resource for the study of the growth and development of photography as a professional tool and popular amusement from the 1890s onwards.”

Chairman & Managing Director of Kodak Limited, Julian Baust said “The earliest items in the Kodak Ltd Archive date from around 1885 when the first Kodak offices were opened in Soho Square. The Archive contains some excellent photographs from Kodak’s history. Kodak Limited is very excited to be relocating our valuable archive over to The British Library, where it will be available to historians and researchers alike.”

Dr Gerard Moran, Dean of DMU’s Art and Design Faculty, said: “De Montfort’s growing reputation as an International Centre in this area of study has been boosted by this generous donation. Postgraduate students at De Montfort University’s Centre for Photographic History will benefit greatly from having immediate access in Leicester to this tremendous resource. I’m grateful to colleagues at Kodak, the British Library and here in the University who have worked very hard to make this happen.”

Amateur Photographer magazine has also run a news story on this with different information. Click here to see.

Comment by Michael Pritchard on July 1, 2010 at 13:52
As far as I know the Kodak archive is not yet available to researchers.