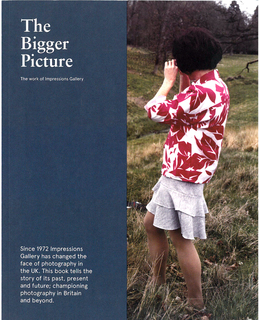 York, and more recently Bradford-based, Impressions Gallery, along with London's The Photographers' Gallery, are the United Kingdom's oldest extant photography galleries. They have both survived the years and continue to produce exciting, ground-breaking and simply, interesting, exhibitions of photography, albeit with significant Arts Council England funding.

To coincide with the transfer of its archives, which date back to its founding in 1972, to the National Media Museum, Impressions Gallery has produced an 80-page book summarising its history and outlining its current activities and ethos. Compiled by Director Anne McNeil and Head of Programme Pippa Oldfield, the book is part history and part hagiography. It may also be a justification for the Gallery's existence - despite the fact that Impressions Gallery hardly needs a book to justify itself. In the current declining public funding climate it probably does no harm to show national and local politicians and funding bodies such as ACE what it has achieved over its forty-plus years. The pages are interspersed with inserted sections showing where its exhibitions have toured to, the photographers it has exhibited, and its reach in its new home in the city of Bradford.

This book is not the history of Impressions Gallery that some would want, but it is far more than simply a justification for why the Gallery exists. The book will prove to be a starting point for historians looking at Britain's still modest photography scene and it does much to show why Impressions Gallery has justified its funding over the years.

As for the Impressions Gallery archives these are now, in theory, accessible to researchers and the public through Insight at the National Media Museum. It is from those that a fuller history of Impressions Gallery and the UK's post-1970s gallery scene will need to be based upon.