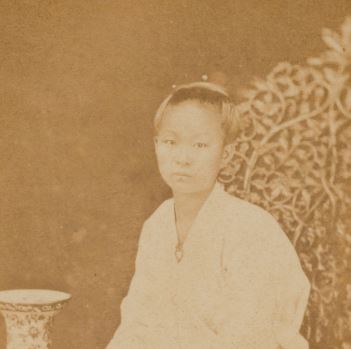 Today we take pictures of anything we fancy on our phone. But in the early 1860s, the idea of portraying daily life using the long exposures and the temperamental wet-plate process of photography was not even imagined. To include people in a photographs, the subjects had to stay still for several minutes – something only achievable in a studio, or perhaps on the verandah of a home. Images of street life were pretty well impossible.

John Thomson arrived in Singapore to work with his brother William, a marine instrument maker with a photo service on the side. They made money from studio portraiture, but also made views to take back home. Working in Penang and Province Wellesley in 1862–63, Thomson realised that he could include the locals in situ with minimal staging. One of his most delightful images shows durian sellers (probably paid to stay still), an image that still evokes any outdoor market scene.

Thomson's photographs from The Straits were left behind when the Thomson Brothers studio closed and their glass plates has disappeared. Thomson's role as a pioneer in the new medium of documentary photography and photojournalism must be gleaned from the surviving small numbers of large prints and tiny cartes de visite studio and outdoor photographs, several of which are held in the Peranakan museum.

About the speaker
Gael Newton, former Senior Curator at the National Gallery of Australia, is an Australian curator and photohistorian specialising in 19th- and 20th-century Southeast Asia photographers. Newton contributed an essay to the forthcoming Amek Gambar: Peranakans and Photography catalogue, about Scottish professional photographer John Thomson (1837–1921), one of the first photographers working in Asia (1862–72).

The talk is part of a programme accompanying an exhibition Amek Gambar which presents over a century of photographs, tracing the emergence, adoption and evolution of photography in Southeast Asia.