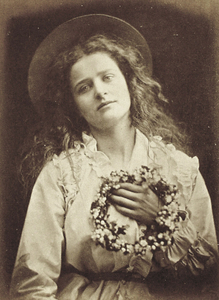 The London Photograph Fair has announced a collaboration with the Julia Margaret Cameron Trust at its debut Special Edition. Based at Dimbola Museum and Galleries in Freshwater on the Isle of White (the former home of the Camerons), the Trust will be bringing original photographs, albums and personal artifacts from their collection to London; a rare treat to see these artworks on the mainland, even more so in the perfect neo-Gothic surroundings of Two Temple Place, Embankment.

Expert talks on Julia Margaret Cameron's life and career, plus demonstrations of her technique will also be given. The venue - the magnificent Thames-side mansion commissioned by William Waldorf Astor - is one of London's hidden architectural gems, opening to the public for only the second time this year.

The London Photograph Fair is a boutique event for fine, rare, and vintage photographs. International dealers will be offering the opportunity to purchase works from the entire history of the medium, including fine art, travel, exploration, fashion, architectural and press photographs, as well as albums and photobooks.