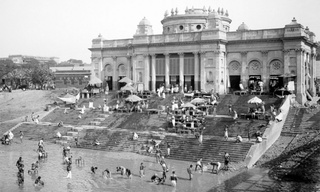 A century-old collection of photographs of India has been discovered in the RCAHMS archive. The rare and fragile glass plate negatives, which date back to around 1912, show life on the subcontinent at the high point of the British Raj.

The 178 negatives were found in a shoebox for a pair of grey, size 9,Peter Lord slip-on shoes, and were stored in their original five-by-eight-inch plate boxes, wrapped in copies of The Statesman newspaper dating from 1914. Founded in 1875, The Statesman is one of India’s largest circulation English language newspapers, and is still published today.

Highlights from the imagery include celebrations for the visit of King George V and Queen Mary to Calcutta in 1912 – the only visit by a British monarch to India as Emperor of the subcontinent – with the city’s buildings lit up at night in tribute; ships arriving at the Chandpal Ghat, the main landing place for visitors to Calcutta along the Hooghly river; pilgrims gathered for a religious festival on the Maidan, the large urban park at the centre of Calcutta; and merchants selling their wares outside the eleventh century Jagganath Hindu temple in Orissa.

RCAHMS architectural historian Clare Sorensen said, "We don't know for sure how the negatives came to be in our collection. We receive archive material from countless different sources, from architectural practices to generous donations from the public, and sometimes take large amounts of material in at once, and often documentation for historical deposits does not exist.

"Over time all this new material will be inspected and catalogued as part of our collection and then made available to the public. It's fantastic that a small shoe-box contained such a treasure-trove of photographic imagery, but in some ways it's not unsual. Our experience as an archive has shown us that some of the most interesting discoveries can be made in the most unlikely of places."

Research by RCAHMS is ongoing into the identity of the photographer and the origins of the collection. Anyone with further information should contact clare.sorensen@rcahms.gov.uk. As the negatives were still wrapped in newspapers from 1914, it is possible that they were transported back to Britain from India at this time, and have remained unopened until now.

All 178 negatives have now been digitised, and a selection of the best images are in an online gallery.