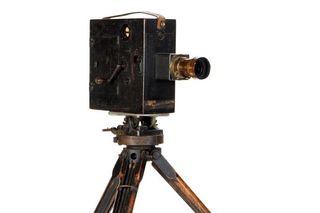 The Guardian has reported that the National Media Museum has purchased Richard and Cherry Kearton's movie camera which appeared at auction in Newcastle recently. The £4000 acquisition was made with the support of the Royal Photographic Society - both Kearton brothers were members of The Society. The early 20th Century hand-cranked 35mm Urban Trading Company motion-picture camera was used by Cherry Kearton on his trips to Africa in the first two decades of the last century. It will be included in upcoming exhibitions dealing with scientific and war photography. 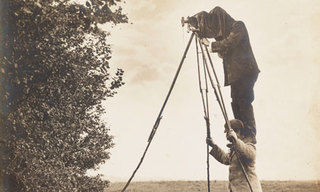 Richard and Cherry Kearton, working from the 1890s, and were possibly the world's first professional wildlife photographers. Starting at home in the village of Thwaite in north Yorkshire with a cheap box camera, they managed to capture some of the finest early pictures of in their nests, insects, and mammals. But having no telephoto lenses or fast film, they had to lug around massive plate glass cameras and devise ever more bizarre ways to get close to their shy quarries.

Cherry Kearton became the Attenborough of his age, moving into wildlife documentaries, working with US President Roosevelt and travelling on safari to east Africa, Borneo and elsewhere. He took some of the first film of the first world war, at Ypres, and went on to found a film company. He died on the steps of the BBC having just broadcast a film he had made about his pet ape, Toto.