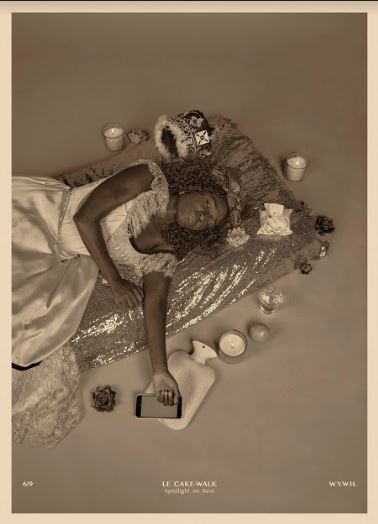 James Hyman Gallery presents a specially curated online exhibition that addresses physical and mental well-being entitled In Sickness and in Health: Heather Agyepong, Anna Fox and Jo Spence. Originally, conceived for the cancelled Paris Photo New York fair in New York in March, the themes of this three person exhibition have taken on a new resonance in the present global health crisis.

The exhibition includes Jo Spence’s seminal “Phototherapy” work made in the 1980s when Spence used photography as a psychological tool to navigate her diagnosis with cancer. Anna Fox presents one of her most celebrated, powerful and intimate bodies of work, My Mother's Cupboards and my Father's Words, a recording of her ill father’s outbursts that were mainly directed at the female members of his family. It is the first time the series has been made commercially  available with the publication of a limited edition. The exhibition is also the premiere for Heather Agyepong's latest series, Wish You Were Here (2020), a new body of work focusing on the life of Aida Overton Walker, the celebrated African American vaudeville performer

The exhibition opening is timed to coincide with Mental Health Awareness Week and 10% of sales will go to MIND, the mental health charity,

Heather Agyepong
The exhibition is the world premiere for Heather Agyepong's latest series, Wish You Were Here (2020). Following the success of her earlier series Too Many Blackamoors, Agyepong’s new body of work focuses on the life of Aida Overton Walker, the celebrated African American vaudeville performer. Known as the Queen of the Cake-Walk – in reference to a dance craze that swept America & Europe in the early 1900s – Walker challenged the rigid and problematic narratives of black performers. Originally performed by slaves who mocked and mimicked the slave owners and high society by the early twentieth century the dance had become so fashionable that postcards depicting Cake-Walk dancers were distributed around Europe. These postcards were often grotesque and offensive with the allure of spectacle where the performers lacked agency. Agyepong echoes these postcards but re-imagines the subject not as one of oppression but of self-care with a mandate for people of Afro-Caribbean descent to take up space. The images explore the concepts of ownership, entitlement and mental well-being. The series was commissioned by THE HYMAN COLLECTION and Agyepong has just been announced as one of the winners of a grant from Firecracker.

Anna Fox
Anna Fox presents one of her most celebrated, powerful and intimate bodies of work My Mother's Cupboards and my Father's Words. This is the first time the series has been made commercially available with the publication of a limited edition. Originally conceived as a miniature limited edition book that paired images and text. While her father was ill for many years, Fox kept a notebook recording his outbursts that were mainly directed at the female members of his family. Her father’s words are paired with a series of claustrophobic images of her mothers' neatly kept cupboards to reveal a couple struggling to keep an even keel in the wake of a rapidly debilitating disease. The series presently features in the provocative exhibition Masculinities. Liberation through Photography (Barbican Centre, London and tour to Rencontres Arles, and the Gropius Bau, Berlin) where the series has met with particular critical acclaim. The book has also long been out of print and this presentation coincides with the launch of a newly conceived publication of the work in a special edition of 500 copies.

Jo Spence
Jo Spence who died in 1992 remains one of the major influences on contemporary British photography in the way in which she placed herself at the centre of her work and in the performative nature of these images. The exhibition includes rare and unique examples of her seminal “Phototherapy” work made in the 1980s. In 1981 Spence was diagnosed with cancer and much of her subsequent work was a response to her treatment by the medical establishment and her attempt to navigate its authority through alternative therapies. Subsequently Spence used photo narrative, montage and performative re-staging of personal trauma, using photography as a psychological tool. In 'Phototherapy' sessions Spence and collaborators such as Rosy Martin adopted techniques from co-counselling. The considerable achievement of Photo-Therapy was to invert the traditional relationship between the photographer and the subject. Whereas previously the photographic subject had little control over their own representation, Phototherapy shifts this dynamic. The subject is able to act out personal narratives and claim agency for their own biography. Spence was recently the subject of a major exhibition at the Wellcome Collection in London.

In Sickness and in Health