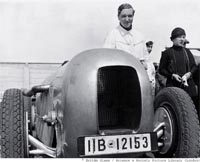 The National Media Museum in Bradford, UK, is currently undertaking a major digitsation project (details of the job to do this was posted here some months ago). The project aims to scan a large proportion of the photographs housed in the Zoltán Glass archive, will systematically catalogue the work of the artist, whose main creative periods came in the 1930s and 1950s, and to make them accessible in digital format. The Bradford collection numbers around 6,000 images in total; the work is scheduled for completion in April 2010.

Zoltán Glass was one of the great commercial photographers of the 20th century – and automobiles were one his favourite subjects. During the 1920s and 1930s he was commissioned by Daimler-Benz AG to take many photographs of Mercedes-Benz vehicles. Glass, for example, documented the period of the classic Silver Arrows, the cars that dominated international grand prix racing from 1934 onwards. But he also turned his masterful skills to photographing the brand’s production vehicles for publicity material. He could even turn ostensibly uninspiring subjects, such as Mercedes-Benz vehicle production, into aesthetically pleasing images. After the death of Zoltán Glass in 1981, his photographic legacy was acquired by the National Media Museum, which houses one of Europe’s most important photographic collections.

At the instigation of Daimler AG, his work is now being catalogued and digitised. The project also involves feeding the original photograph captions into the database and reproducing the images in their original sequence. The process makes use of state-of-the-art technology, which enables the negatives and their immense wealth of detail to be photographed in high resolution using a calibrated high-end medium-format camera in order to create a neutral copy of the original. The results are first saved as files of approximately 100 megabytes in TIFF format. Finally, special software is used to convert the negative images into positives.

Once the work is complete, the photographs will be available for further historical editorial work and other projects.