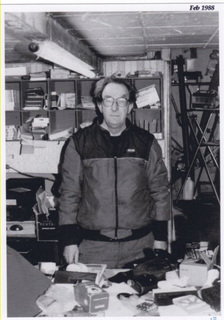 Gordon Moore, who has just died was the last of a long line of Liverpool camera makers. He was born in 1928 and his early early education was undertaken at Mersey Park School in Tranmere, a short walk from his home. After leaving school Gordon enrolled at The Institute in Whetstone Lane, Birkenhead, where he studied mechanical Engineering.

Leaving Whetstone Lane Institute he was called up for National Service spending two years in the RAF (Gordon’s father Herbert had been an original Royal Flying Corp member from 1915-1918).  At the end of his National Service Gordon took a job at Dave Lloyd’s Garage in Willaston, South Wirral where he drove the garage Austin van around what were then single track roads at  a steady 65 miles per hour.

Gordon eventually decided he would like a change of scene and opted to work in the family photographic establishment, Moore and Co rather than their profitable cycle shop. The firm was based at 101-103 Dale Street Liverpool and so began a mercurial career with cameras. Gordon loved the older pieces of equipment because he could tinker with them and get them sorted and working again. He often gave me tips which I use today when I get a problem. Moore and Co during Gordon's tenure was regularly sought out by Liverpool University with their elderly equipment. The company often developed and printed photographs required in Court Cases, convenient as the Law Courts were and still are next door in Dale Street. They took the exposed films in and immediately transhipped them to Kodak Laboratories in Bold Street half a mile away who would process and print for return twice a day.

His other love was cycling. Gordon was never without a camera trying to be a cycling Cartier Bresson taking monochrome candids at every opportunity. These he developed and printed himself often being seen with a bulging wallet of photographs he was a seriously keen amateur photographer. Gordon met his wife though cycling as she was a keen member of Birkenhead Ladies Cycling Club and romance blossomed. They were married on 28 August 1954.

Gordon retained a love of cycling and regularly raced around Cheshire and North Wales as a member The Birkenhead North End Cycling Club an association he retained up to his death. One of Gordon’s great friends Dave Allen a professional rider who principally raced in Ghent Belgium still owns a “Clifton” racing cycle of Moore & Co. origin. It was a common sight to see Gordon and his best pal Les McGinley marshalling regularly at races for many years after he stopped competing.

His passing  ended the association of Liverpool with camera makers of the golden period, during which time many weird and wonderful cameras were produced, but none more interesting of varied than Moore & Co's eponymous Aptus.

Those of us fortunate to have known Gordon will fondly remember a gentle happy family man who was always a pleasure to meet with a screwdriver in one hand and a camera in the other.