Pioneering photographer's observatory and estate to be restored 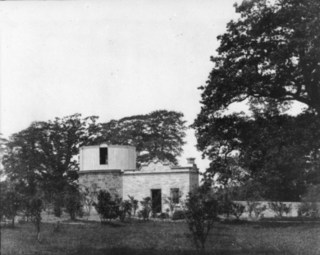 An iconic Swansea building where a pioneering scientist took one of the earliest ever photos of the moon will soon be brought back to life. Swansea Council has signed a 25-year lease with the Penllergare Trust for the 19th Century equatorial observatory and laboratory at Penllergare Valley Woods that once formed a local hub for stargazing.

The historic building, also a Scheduled Ancient Monument, was built in 1846 and went on to house a telescope for John Dillwyn Llewelyn, a groundbreaking photographer and astronomer of the period. From the observatory, John and his daughter, Thereza, would experiment by taking photographs of the moon.

Cllr Nick Bradley, Swansea Council’s Cabinet Member for Regeneration, said: “We signed an agreement with the Penllergare Trust last month to work in closer partnership than ever with them to protect, restore and regenerate the natural and cultural landscape of the stunning Penllergare Valley Woods. The lease agreement for the observatory building there shows considerable progress has already been made for the benefit of the thousands of people who visit the woods every year. “The observatory building has a rich and fascinating history and its restoration forms part of what’s going to be an exciting future for this much-loved beauty spot.”

A £2.9 million restoration project is currently underway at Penllergare Valley Woods with funds from the Heritage Lottery Fund and the Parks for People programme. Swansea Council has contributed a grant towards the observatory works.

The observatory will be repaired and restored over the next 18 months. It will also be made accessible along with other attractions in the woods like the terrace gardens, the upper lake, the waterfall and an old stone bridge known as the Llewelyn bridge.

Terry Jones, Chairman of the Penllergare Trust, said: “The observatory is the scientific legacy of John Dillwyn Llewelyn. It has survived over half a century of neglect along with the picturesque designed landscape garden in the valley below. We’re looking forward to bringing this nationally important historic structure back into good condition and conserving it for public benefit.”

A new woodland car park and kiosk is also being constructed that’s due for completion this summer. A micro hydro turbine will be installed to generate electricity and ensure a sustainable future for the Valley Woods.

The Penllergare estate was at the height of its prosperity in the nineteenth and early twentieth centuries. Its creator, John Dillwyn Llewellyn, was known for his scientific experiments, pioneering photography (he was a founder member of the Photographic Society, later Royal), landscape design and horticulture.