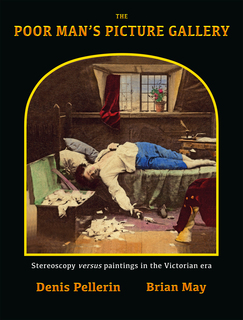 In this pre-internet, pre-television, pre-cinema, and pre-radio time known as the Victorian age, there were  only a limited number of ways for middle class people to have access to pictures or art. They could stop outside a printseller’s shop to look at the prints and lithographs displayed there, buy one of the numerous illustrated magazines that had started to be published from the 1830s, or visit the yearly Royal Academy Exhibitions and some of the recently opened public galleries.

Though photography had been revealed to the world only two years after Queen Victoria came to the throne, over a decade would elapse before the influence of the new medium could be felt outside of portraiture. Things began to change after 1851 when the wet collodion process invented by Frederick Scott Archer and the development of the albumen paper enabled photographers to produce multiple prints at a much lower cost and therefore to reach a wider clientele. Around the same period, the previously dormant stereoscope which, by means of two flat, slightly dissimilar pictures, gave the viewer the illusion of depth, became the latest craze. Avid spectators could suddenly discover the whole wide world in its three dimensions without leaving their parlour or fireside thanks to the efforts of stereophotographers operating farther and farther away from home By 1859 they were offering views of Europe, Egypt, and even Japan and China.

The stereoscope was also particularly well suited for viewing statuary. Amateurs could own all the best ancient and modern sculptures in the world in a space no bigger than a shoe-box and gaze at them leisurely, without being disturbed by other visitors or wardens.

It would have appeared that the flat surface of the painted canvas, the engraving or the woodcut was way beyond the scope of the stereoscopic artists but that would have been counting without the latter’s resourcefulness. A number of stereo-photographers who specialised in narrative scenes, started re-staging in their studios several of the most popular paintings, illustrations and cartoons of the time. Some of their works were faithful copies of the originals, others were only inspired by them, but all of them ended up as stereocards in the bourgeois parlours and constituted what became known as “the poor man’s picture gallery.”

Photo historians Dr. Brian May and Denis Pellerin have researched these little known connections between Victorian high or popular art and stereophotography. They are publishing a fully illustrated book which, under the title The Poor Man’s Picture Gallery, examines for the very first time the sources of inspirations of several photographic artists of the era. The 208 page book, the second to be published under the imprint of the London Stereoscopic Company, comes with Dr Brian May’s specially designed Owl viewer allowing readers to discover the images in glorious 3D.

This work accompanies a six-month exhibition that was put up by Tate curator Carol Jacobi and that will be held at Tate Britain, London, from October 2014 to April 2015. Twelve paintings from the Tate collections will be displayed side by side with the stereophotographs they inspired. Stereoscopic cabinets, also designed, by Dr May, will make it possible for visitors to experience 3D viewing the Victorian way and to compare the three dimensional rendition of the painting with its original version hanging on the wall. Artists such as Henry Wallis, Philip Calderon, Sir John Everett Millais, Charles Landseer, Charles Leslie, William Collins, and many others, both English and foreign, had their works revisited for the stereoscope. It appears however that, in a few cases, it was the pictures made for the “magical instrument” that provided the artist with a source of inspiration for his work. The book also reveals that a fair number of stereocards were the inspiration for popular china figures bought or won as prizes at fairs and consequently known as “fairings.”