Publication: Shadows of War. Roger Fenton's Photographs of the Crimea, 1855 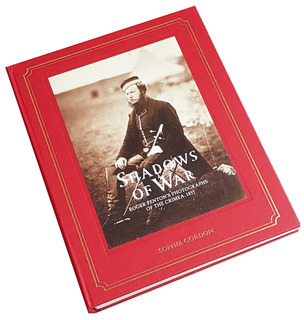 Shadows of War. Roger Fenton's Photographs of the Crimea, 1855 is a new publication to accompany the exhibition of the same name currently on show at The Queen's Gallery, Palace of Holyroodhouse until 26 November 2017. It will be shown in London at the Queen's Gallery, Buckingham Palace in 2018.

The book provides a description and context for the Crimean War and Fenton's photographs of the conflict, reproducing the photographs shown in the exhibition. The Royal Collection Trust holds one of the best collections of Fenton's work including 350 of his photographs of the Crimean conflict. Appendices, reproduce useful source material including original handwritten catalogue recording the photographs from 1855, thumbnails of the Fenton Crimean images in the Royal Collections and the Agnew and Co catalogue of 1855.

The book further extends the knowledge of Fenton and his photography we have from Roger Taylor and others.