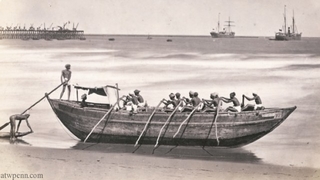 In November 2014 Christopher Penn published The Herklots folder of Photographs, his third book about photography in South India in the nineteenth century.  His first, In pursuit of the past, containing 333 A5 pages and 68 illustrations, starts like a ‘Who do you think you are?’ story as he learns for the first time about his great-grandfather A.T.W. Penn (1849-1924) one of the pioneering photographers of India.  It describes the life and work of Penn and was published in 2008.

Out of the research for these two books came the third, containing 154 A4 pages including 77 duotone plates, published in November 2014.  It describes the growth of Coonoor, the business centre of the Nilgiri Hills in south India, light industry established there, the development of its coffee plantations and information about certain historically important families and individuals including the Herklots, the Stanes, and the Groves families, and photographers active in the region: John Nicholas, James Perratt Nicholas, Edmund David Lyon, A. T. W. Penn and Dr. Alexander Hunter who founded the Madras School of Industrial Arts in 1850 and was joint founder with the Hon. Walter Elliot of the Madras Photographic Society in 1857.