Publication/Exhibition: Now and Then, Daniel Meadows / Oxford, from 4 October 2019 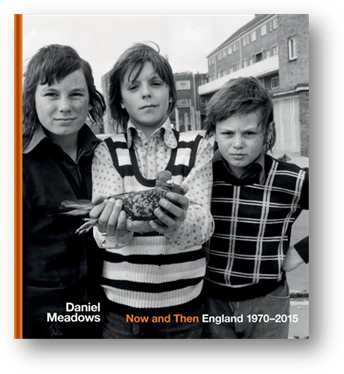 Bodleian Library Publishing is publishing a new book Now and Then tying in with an exhibition of the same name. Daniel Meadows is a pioneer of contemporary British documentary practice. His photographs and audio recordings made over forty-five years, capture the life of England's ‘great ordinary’. Challenging the status quo by working collaboratively, he has fashioned from his many encounters a nation’s story both magical and familiar.

His new book covers the full range of his ground-breaking projects, drawing on his archives now held at the Bodleian Library. Fiercely independent, Meadows devised many of his creative processes. He ran a free portrait studio in Manchester’s Moss Side in 1972, and then travelled 10,000 miles making a national portrait from his converted double-decker bus called the Free Photographic Omnibus, a project he revisited a quarter of a century later.

Alongside the portraits of people, Daniel Meadows also portrays the landscape of England, then and now, and the work people did, many now long-forgotten trades such as the engineer for a steam driven cotton mill and the steeplejack.

At the turn of the millennium Meadows adopted new ‘kitchen table’ technologies to make digital stories: ‘multimedia sonnets from the people’, he called them. He sometimes returned to those he had photographed, listening to how things were and how they had changed. Through their unique voices he finds a moving and insightful commentary on life in Britain and how much it has changed since he began his life’s work.

Daniel Meadows’ photographs have been exhibited widely with solo shows at the Institute of Contemporary Arts London (1975), Camerawork Galley (1978), the Photographers’ Gallery (1987) and a touring retrospective from the National Science and Media Museum (2011). Group shows include Tate Britain (2007) and Hayward Gallery Touring (2008).

The exhibition Daniel Meadows: Now & Then celebrates the work of one of Britain’s foremost photographers who worked from the 1970s onward, authentically capturing British life. The exhibition comprises 17 pairs of portraits which depict the same people 25 years apart (1970s – late 1990s), taken as part of Meadows' Free Photographic Omnibus project in the 1970s for which Meadows originally toured the UK in a double-decker bus capturing the lives of ordinary people. The display also features 16 short films about his subjects as well as giant news clippings showing how Meadows reached out via local media to find his subjects. The exhibition marks the recent and important gift of Daniel Meadows’ photographic archive to the Bodleian Libraries. Daniel Meadows: Now & Then, Weston Library, 4 October – 24 November 2019. For more information visit www.bodleian.ox.ac.uk/whatson