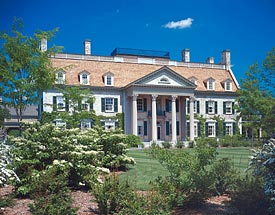 George Eastman House, Rochester, NY, has made changes to The Richard and Ronay Menschel Library - one of the world's greatest libraries dealing with photography and film. Long-standing librarian and curator Rachel Stuhlman has been made redundant after nearly thirty-years and she is is now Emeritus Librarian and Curator of Rare Books. There has been no wider reorganisation or other staff losses at GEH.

The change is part of a broader vision for the library at GEH over seen by Museum Director Bruce Barnes, Ph.D. In future the library will be managed by an experienced research librarian, who will focus on developing GEH's research resources and on the cataloguing and digitization of its world-class collection of books and manuscripts related to photography and cinema.

Barnes told BPH: 'We believe that this approach will better serve our institution’s curatorial and scholarly missions, as well as our commitment to enabling research by curators and scholars from around the world.' He added: 'Over the years, our collection of rare books, manuscripts, and artists’ books have played an important role in our institution, but we have rarely presented exhibitions in which the objects from our library collection are central.  As we have built the curatorial and research staffs of our photography and moving image departments, it has become increasingly important that our library support these departments as effectively as possible'.  A 2007 book Imagining Paradise showcased some of the treasures of the library.

The new librarian will report to Dr. Lisa Hostetler, Curator-in-Charge of our Department of Photography, with the aim of ensuring that a curatorial vision continues to guide the library and to facilitate closer coordination between the library and GEH's photography department.  The library will also continue to support other curatorial departments, as well as visiting researchers.

The move is part of Barnes' broader vision for GEH to digitise the collections and to explore the existing collections for hidden treasures as it embarks on boosting its endowment from $35m to the $100m that will make it viable and allow it to be more proactive in its public programmes. Eastman House also added at the time of his appointment that it expected Barnes to create 'more worldwide traveling exhibitions and an enhanced virtual museum online.'  Click here for more about Barnes and his plans, and click here for comment.

The library - one of the most important in the world for photography and film and is described by GEH as having 'the breadth and depth of coverage of all aspects in the history, aesthetics, and technology of photography' unmatched by any other, and  'it is only with a collection such as the Menschel Library’s that scholars can obtain a broad overview of the international development of photography while investigating special problems'.