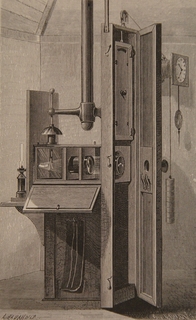 Details of the first successful camera for continuous recording have recently been published.  When Sir Francis Ronalds became Director of the Kew Observatory in 1842, he decided to ease the load on observers by creating a camera that would capture the minute-by-minute variations of a scientific instrument through the day and night.  By early 1846, different cameras were recording atmospheric pressure, temperature, humidity, atmospheric electricity and geomagnetic forces.

Either Calotype or Daguerreotype could be used in the machines and Ronalds worked with many photographic pioneers in London in perfecting the processes for his unusual application; these included Collen, Malone, Henneman, Beard, Egerton, Nicklin and Herschel.  Waxed paper was later the medium of choice, which was adapted to the cameras by William Crookes, and, still later, gelatinised paper.

The instruments were in use at the new Met Office from the early 1860s in developing the science of weather forecasting and in total around 80 of them were deployed around the world into the 20th century.  Original examples survive at the Science Museum in South Kensington and at the Oxford Museum of the History of Science.  Photographs from as early as 1845 are retained in various archives, including the Royal Observatory Greenwich collection at Cambridge University Library; the Oxford Museum; the National Meteorological Library and Archive at Exeter; and the Institution of Engineering and Technology.  Malone’s photographic portrait of Ronalds is at the Royal Society.

Further details of these materials are provided in: