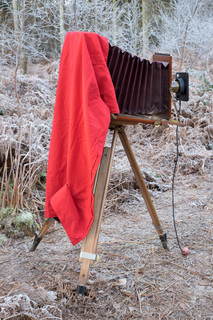 Originally, the camera had no shutter: the exposure was made by removing and then replacing the lens cap. A Packard shutter has been made to fit in front of the lens (in a mounting attached by three nylon screws each time the camera is set up and removed after use). The Packard shutter, invented toward the end of the nineteenth century, operated by a rubber bulb that allows the photographer to judge time exposures down to about 1/10 second, with a pin setting for 1/25 second.

An antique wooden surveyor’s tripod has been converted to take the camera, with a 300 mm diameter oak table to support the camera’s baseboard. The female thread on the baseboard’s brass bush does not conform to any known standard but the diameter and pitch are within the tolerances of a modern M8 metric bolt.

After carrying out camera tests with paper negatives, we have adopted an Agfa CP-G green-light-sensitive X-ray film, rated at 64 ASA following strip tests to determine first tone above film base and fog. We have chosen this film because it is economically available in large sheets; it can be loaded and processed under red safelight; and the spectral sensitivity gives very interesting results. It is worth noting that nineteenth-century photographic emulsions were insensitive to red light.

Like all ultra large format medical X-ray film, Agfa CP-G has a layer of emulsion on both sides of the carrier, which makes it tricky to develop without an industrial installation. We have however evolved a dish development process, using a highly diluted Rodinal developer, that gives good results.

Processed negatives are scanned to make 16-bit B&W digital master files at a resolution suitable for printing at up to four diameters enlargement. The master files are adjusted, corrected and spotted in Lightroom and Photoshop before prints are made on Hahnemühle Matt Fine Art Photo Rag, 308 gsm, using Epson UltraChrome HD archival pigment inks. 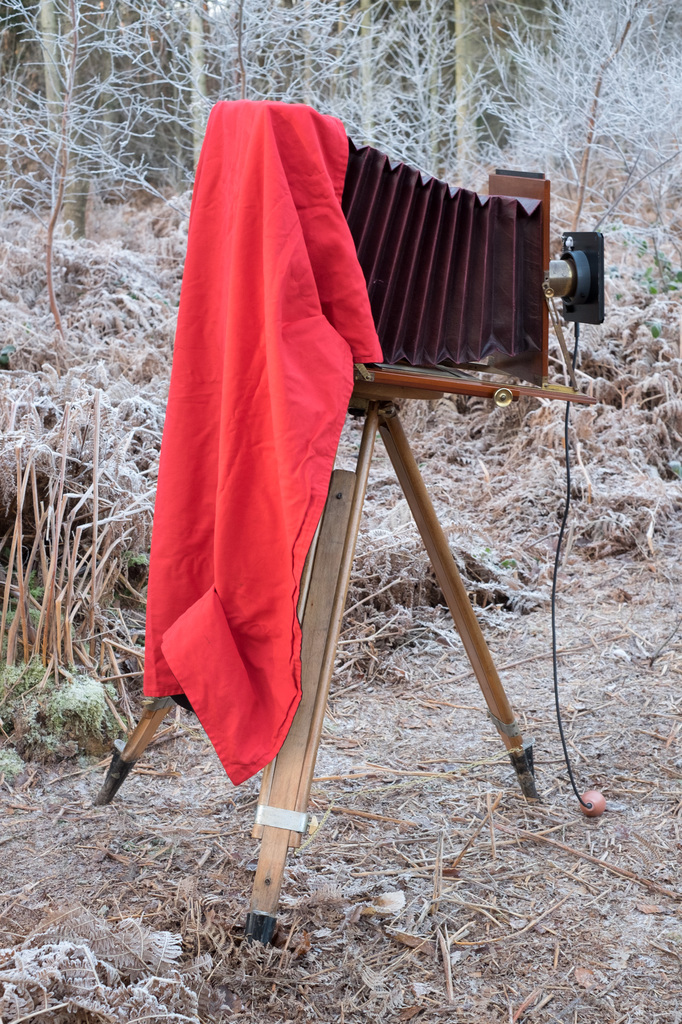 Looks good, when can we see some results of the xray film?