Many of us will be familiar with Roger Fenton’s much reproduced photograph of his photographic van, which features Marcus Sparling, his chief assistant the Crimea, sitting on the box seat (see right). The left side of the van also appears in Fenton’s group portrait of cavalry personnel in the image entitled Cooking House, 8th Hussars. Recently, the van has been discovered in another three of his images, which like Cooking House, 8th Hussars, were taken in the spring of 1855 in the cavalry camp located in a valley just to the west of the settlement of Kadikoi about a mile north of the British supply port of Balaklava.

Magnifications of the parts of Military Camp and Camp of the 5th Dragoon Guards, looking towards Kadikoi which show the van are reproduced below (see right and lower right respectively). 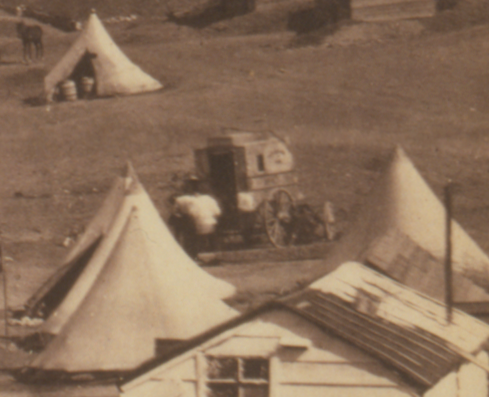 The location of the van in Military Camp is on the grass divide that separated the camps of regiments of the Light Brigade  from those of most regiments of the Heavy Brigade of Cavalry. The line of three tents belonging to the Light Brigade seen closer to the camera to the left of the van appears in the background of many of Fenton's portraits taken in the cavalry camp. Images made in the vicinity of the van at this location are entitled Brigadier-General Lord George Paget; Lieutenant-General The Honourable Sir James Yorke Scarlett, K.C.B; Cornet Wilkin, 11th Hussars; Lieutenant King, 4th Light Dragoons; Captain Portal, 4th Light Dragoons, equipped for Balaklava; The Pocket Pistol; Chasseurs d’Afrique Officer and Major Morris, C.B., Royal Artillery. 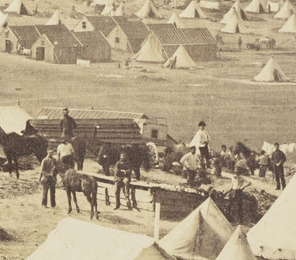 obscured. Only the front of the van can be seen protruding from behind a dark coloured hut. In the area between the van and the camera, Fenton is believed to have taken his portraits entitled Major Burton, 5th Dragoon Guards and Captain Bernand, 5th Dragoon Guards. Another mistake in an image title was made here as the latter’s name was actual spelt ‘Burnand’.

The 5th Dragoon Guards were in the Heavy Brigade. The huts and tents in the background (see right), which lie across the grass divide that separated the camps of the Heavy and the Light Brigade, belong to the 8th Hussars. The stretch of grass in view is lower down than the same slope seen behind the van in Military Camp. Fenton took portraits entitled Colonel Clarke, Scots’ Greys, with the Horse wounded at Balaklava; Mr Angel, Postmaster; Captain Seymour, 68th Light Infantry; Captain Inglis, 5th Dragoon Guards; Colonel Shewell, Light Cavalry; Colonel Doherty and the Officers of the 13th Light Dragoons and others a little further up this slope to the left.