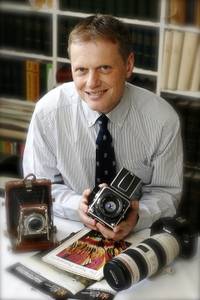 Michael Pritchard takes up the post on 20 September and will be responsible for managing The Society’s headquarters operations, working with the Council to lead the future direction of the Society, and for further raising the profile of the Society nationally and internationally.

Michael Pritchard was with the auction house Christie’s between 1986 and 2007 where he was a director, responsible for photographic auctions as well as having wider international business responsibilities. He completed a PhD examining the British photographic industry in 2010.  Most recently he has been teaching at De Montfort University, Leicester, and working for the British Library on the Kodak Historical Collection. He has had a passion for photography since he was 10 years old and worked as an assistant at a commercial and portrait photographic studio in Watford for many years. As an active photographer he has a particular interest in landscape photography. Michael joined The Society in 1979 as a junior member, achieving his Associateship in 1984 and Fellowship in 1986. He is deputy chair of the Research, Education and Application of Photography Distinction Panel and is active on the committee of the Society’s Historical Group.

The offical press release can be found here, and a news article here and here.

Comment by Caroline Fuchs on August 30, 2011 at 16:21
Congratulations on your appointment!

Comment by Judy Annear on August 30, 2011 at 0:09
congratulations - I look forward to more information once you have settled in.

Comment by Michael Pritchard on August 29, 2011 at 17:15
Thanks everyone...another opportunity has yet to materialise and I was approached to apply for the RPS job...

BPH will continue as before as there seems to be a need, or at least an interest in it.

Roger - we'll be near-ish neighbours so I hope to see more of Lacock and your exhibitions when I move to Bath next month.

Congratulations on your appointment.

Congratulations on the appointment!