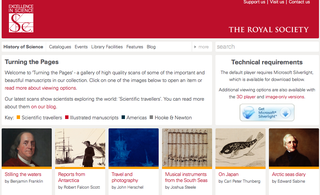 
Of interest to fellow BPH members are some of the documents published online today. They include accounts from Robert Falcon Scott, commander of the expedition to the Antarctic, during the earliest British attempt to survey the frozen continent between 1901 and 1904. He talks of balloon flights over the unexplored continent and an account of a sledge journey to the furthest point south then reached, a journey that almost killed his companion Ernest Shackleton.

Another one are pages from the diary of the astronomer (and also botanist, chemist, mathematician, to name but a few!) John Herschel from 1839 which give some insight into his role as the co-inventor of photography. According to Keith Moore, head of library and archives at the Royal Society's Centre for History of Science, "William Henry Fox Talbot has this great idea to use a camera to take an image, but he couldn't fix the image and make it permanent on paper. It was John Herschel who did that. Herschel was effectively the co-inventor of photography and that's evident from the diaries in 1839 where he's talking about his photographic experiments."

You can check them out for yourself at the Royal Society's website here.

A piece of trivial:  Herschel was held in high esteem by his Victorian peers; he is buried in Westminster Abbey and lies next to the two aforementioned titans of science, Darwin and Newton.