I recently discovered and subsequently fell in love with one of these cameras in a charity shop I visited back in February with my fiancée, Cat. She purchased the camera for me for a valentines gift and after a little haggling, we walked away with the camera for the princely sum of £8.  Now I didn't know a lot about these cameras at all. I remember my grandad having what was called a 'Box Brownie' (I now know there are a number of Kodak cameras that fall into this category) but all I knew as a child was that t took pictures. I remember playing with the shutter, and wondering what the red window on the back was for. Years later, I come across one and I still know very little about them. The chap in the shop took it away to inspect it and after a few minutes said it appeared to be in perfect working order, and that the film it took, 120, was still readily available. I took him at his word and scampered home to inspect my new toy in privacy. And here she is in all her glory. 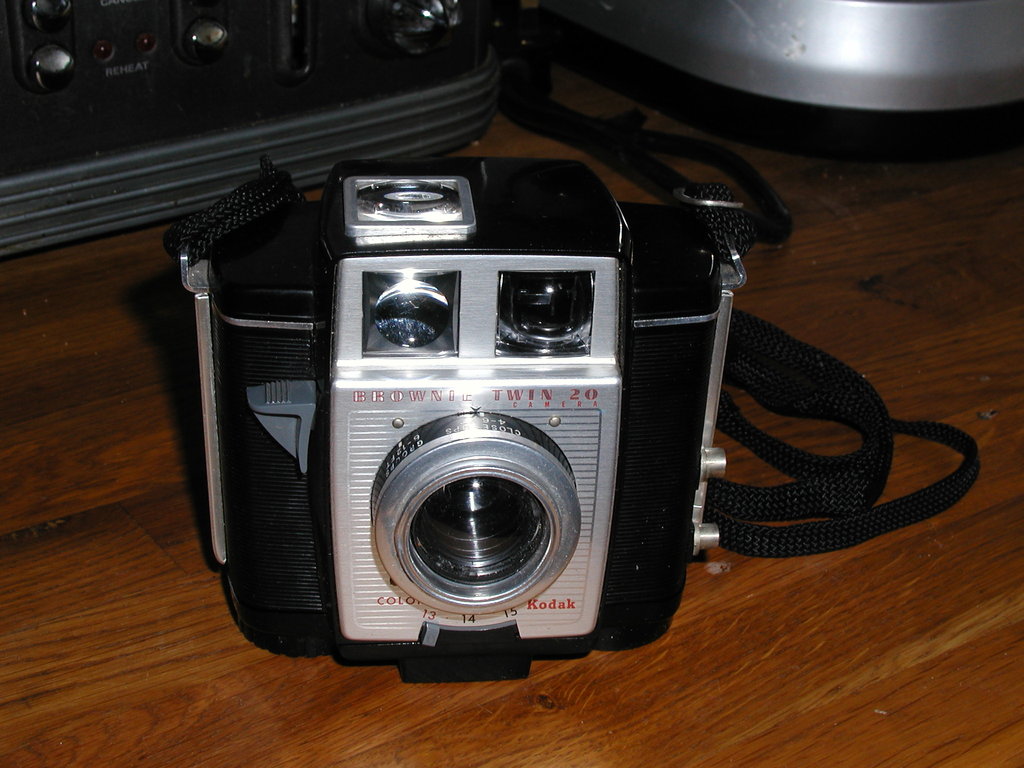 Since I knew nothing about her, I decided to do a little investigation. As it turns out, she doesn't take 120 format film at all, she takes 620 format film. As you guys will know all too well, this format was special developed by Kodak for nefarious reasons to try and 'lock' the camera user to Kodak film. A neat idea, or so they thought. Unfortunately, 620 film was discontinued by Kodak some time ago, and is very rare indeed. So would I ever be able to take pictures with this wonderful machine? As it turns out, yes I can! After some more research, it turns out there are a number of possibilities to take pictures with a brownie. One way, is to re-spool 120 stock onto a 620 spool. Since I don't have a darkroom, or a changing bag, or even the knowledge of how to perform such a task, this was a no-no. And besides, I'm lazy and always on the lookout for an easier way.  Secondly, I could obtain film from someone who had already performed this task. A quick search on Ebay confirmed by suspicions. Yes, there are a few people out there who have done this, but they want an absolute fortune for the privilege! Not only am I lazy, I'm also a Yorkshireman, through and through! There must be an easy, yet cheap way. After more o-nline research it turns out, with a little jiggery pokery, you can adapt 120 film so that your Brownie camera accepts it to shoot with. To perform the task, you need to obtain some sturdy nail clippers and a fine file or sand paper. (I obtained some very cheap nail clippers and a metal nail file from a certain chemist that rhymes with 'Hoots').  First, buy some 120 stock. You'll find it's cheaper if you buy multi-packs, but being the cautious sort, I decided to buy just one roll of Ilford B & W 100 speed in case there were any issues.  Before I started I checked the retaining spring on the camera housing to make sure it was nice and tight to ensure there wouldn't be any light leaks. I took the film out of it's packet and got everything together on a nice flat surface. First, I trimmed the edges of the 120 spool to make it the same diameter as the 620 spool. There is a little lip that runs around the edges which is roughly the same size, which makes a nice guide.  After flipping the spool over and doing the other end, I carefully ran the metal file over the whole thing to make it nice and smooth. Next, I compared the spools for hight. 620 spools are ever so slightly shorter than 120 spools, so I used the file to bring them down just a little bit.  I offered the spool up to the camera to see what it was like, and what do you know, it was a perfect fit! Now I'd never used one of these cameras before, and surprisingly, details on how to load the film were pretty scarce. through trial and error, I worked out which way round the film was supposed to go and how to feed it into the take up spool.  I loaded the housing back into the camera body, and sealed it shut.  t was a little stiff at first, but I managed to wind the film onto the first frame, success! Now all I needed was a fine day and something interesting to shoot!  A couple of weeks ago, Crich Tramway Museum held a 40's weekend. Both my fiancée and I are 40's enthusiasts and I prayed the sun would be out so that the conditions for shooting with my brownie were favourable. Luckily, it was a perfect day, and my 12 exposures ran out quickly. Then it was off to my local Jessops to get them developed. What with Bank holidays and royal nuptials, it took over a week to get the photos back. Gingerly, I opened the envelope and to my utter shock, the results were stunning! Despite shaking more than Elvis in an earthquake and completely ignoring distance and speed settings, most of the pictures were crisper than a winters day!  I honestly couldn't believe these pictures were taken with a camera over 50 years old! My father has kindly offered to scan the negatives for me and I'll post the results as soon as I have them.  I've managed to obtain some expired 620 colour stock (expired in 1983!) and I'm now scanning the weather forecasts for more sun so I can shoot some more pictures with my favourite camera, there's life in the old brownie yet!

Look forward to seeing the end results! There's still life in these little gems, and it's not all about pixel counting! 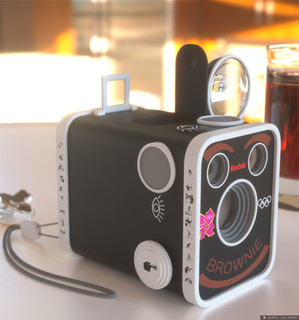 Not sure if you have seen this, but a BPH member has done a modern twist to the Brownie in time for 2012 which he posted in a discussion here.

Photo: Kodak Brownie for the Olympics 2012 by James Coleman.