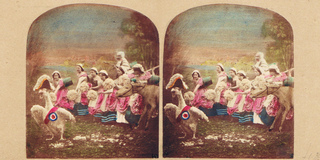 This Alfred Silvester Stereoview puzzles me. I'm unable to understand its meaning. A goose (a Gallic cock, maybe ?) whose head is that of Napoleon III, is pushed or kept at bay by a group of maidens. Knowing that the relations between the French Emperor and Queen Victoria were reasonably good in the early 1860s, then… what in the diplomatic dealings between the two countries, or the political situation at the time, might explain this rather humiliating satire of a sovereign ally? I would not be able to solve the puzzle without the help of a knowledgeable member familiar with the intricacies of British politics at the time.

Does anyone know anything about this image or its significance ? Any idea would be much welcome. 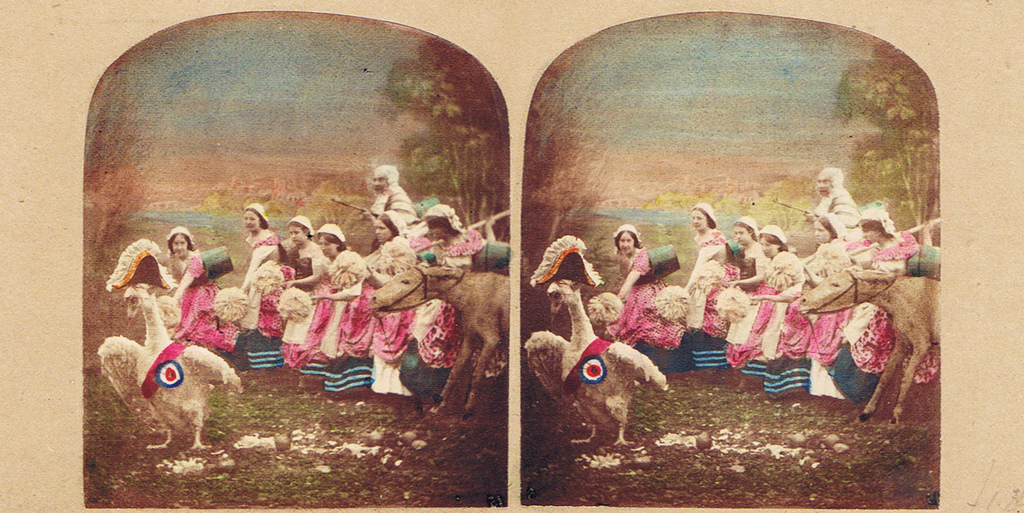 Thank you, Denis. I will try to order the Stereo World issue ASAP. Best (JC)

I told you I would keep you informed and I am glad to tell you that the 11-page article Boo to a Goose, which explains Silvester's strange stereo, was indeed published in the November-December issue of the American magazine Stereo World.

I will definitely keep you informed. Best (D.P.)

Thank you indeed for your comment. Le hasard fait bien les choses ! I'm looking forward to reading your article in "Stereo World" (((... provided I stumble upon the right issue))). Do you mind keeping me (us)  informed when your study (either in the magazine or as a monograph) is published ? Thank you in advance.  (J.C.)

I have written a whole article about this photo and a few others from the same series. It should be published soon in the American magazine Stereo World (under the title Booh to a Goose) and a bit later as part of a monograph I am working on about Napoleon III and the Imperial Family of France in the stereoscope.