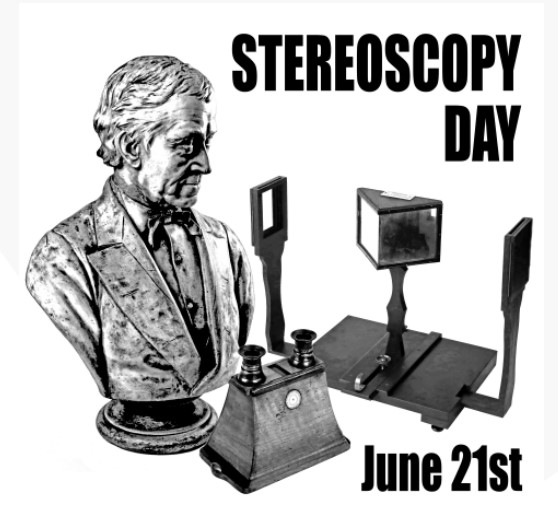 Stereoscopy Day is an international celebration of the birth of stereoscopic 3-D. It celebrates the inventor of stereoscopy, British polymath Sir Charles Wheatstone, its pioneers and their successors up to the present day, its long history from its first Golden Age and subsequent periods of popularity, its rich diversity and multiple uses in various fields, as well as the sheer immersive magic it brings to any photograph and other applications.

Stereoscopy Day will be celebrated across the world every year on June 21st, which is the anniversary of the day in 1838 when Sir Charles Wheatstone officially presented his stereoscope to the Royal Society of London and demonstrated his theory of binocular vision. A more portable version of the stereoscope was later popularised by Sir David Brewster.

Stereoscopy Day can be honoured in many ways to promote the history and present uses of stereoscopy. These can include sharing stereoscopic 3-D related posts on social media, such as stereo photos you’ve taken yourself or highlighting stereoscopic treasures within collections (don’t forget to add #StereoscopyDay), talks, presentations, meetings, interactive displays, workshops, exhibitions or special discounts.