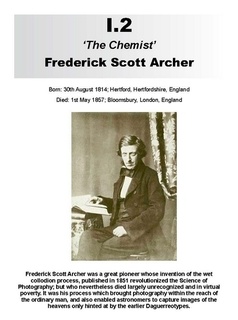 For example, it is usually stated that FSA was born in Bishops Stortford, Hertfordshire, England in 1813, the son of a butcher and that he was orphaned at an early age. All of this is a myth. Primary contemporary records held in the Hertfordshire Archives and Local Studies office, prove beyond doubt that he was in fact born at Bull Plain, Hertford on the 30th of August 1814.

Although his mother died in 1817 when he was two years old, his father Thomas Archer remarried in 1830 when FSA was fifteen. Furthermore his father was no ordinary butcher, but an influential citizen of Hertford, a wealthy farmer and supplier of meat, who became the town's mayor in 1818. In 1820 Thomas Archer was declared a bankrupt and two years later the subject of a trial at the Assize Court.

New research indicates that FSA was greatly influenced by the landscape artist, J. M. W. Turner and that almost all of his photographic output were the subject of drawings or paintings by this giant of art.

Only with the introduction of 'mass produced' Gelatino-Bromide 'dry' photographic plates from the late 1870s and early 1880s was Archer's wet collodion process replaced in astronomical photography:

The FSA biography is available here: