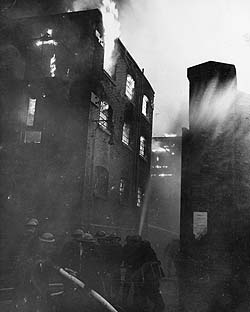 People looking to uncover the true spirit of the iconic and currently ubiquitous wartime poster, Keep Calm and Carry On, may want to head to the Royal Air Force Museum to see the real backdrop of this chirpy wartime notice. The Mayor of London’s photographic and image based exhibition, commissioned by Boris Johnson for City Hall to commemorate the 70th anniversary of the London Blitz, is heading from its temporary home for a spell at the historic Hendon site.
Dedicate to the individuals involved in the emergency, volunteer, transport and specialist services who kept London going during the darkest days of the War, the exhibition features hard-hitting wartime images together with histories culled from the collections of various London organisations.
Each of dramatic photographs vividly portrays the story of London’s people, their determination and ‘Blitz Spirit’ at time when 30,000 Londoners were killed, entire communities destroyed and countless thousands left homeless.
The aerial bombing campaign on London during the Second World War ran from September 7 to May 11 1941. During this period 50,000 bombs and millions of incendiary devices fell on the city.
“We are particularly honoured to display this collaborative effort,” said Ian Thirsk, Head of Collections at the Royal Air Force Museum, “Iwhich narrates the story of how so many of the capital’s organisations were central to the on-going delivery of vital public services during late 1940 and early 1941.”
Mayor of London Boris Johnson also welcomed the exhibition's showing at the RAF Museum and similarly paid tribute to the “bravery and dogged determination of the men and women who battled to keep London going in the face of a terrifying and unremitting bombardment. This tremendous spirit and resilience remain at the very heart of the capital and we owe a huge debt of gratitude and respect to all those who helped secure London's future.”
The rarely seen images have been provided by London Transport Museum, the Museum of London, the Metropolitan Police Historical Collection, the Fire Brigade Museum, London Ambulance Service, Barts and London NHS and the Royal Pioneer Corps Association.

The London Blitz 70th anniversary Exhibition, The Bomber Hall of the Royal Air Force Museum, Hendon until May 31 2011.