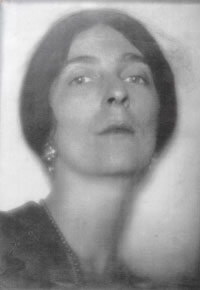 The fifth annual Annan Lecture will be given by Joe Mulholland, who tells the extraordinary story of the highly distinguished and important photographer Margaret Watkins, who died in obscurity in Glasgow in 1969. Born in Hamilton, Ontario, in 1884, Watkins was active in New York in the 1920s, where she had a studio in Greenwich Village and worked with Clarence White and the other great photographers of the period including Stieglitz and Strand. Her work in advertising and art photography was often innovative and experimental, and she exhibited internationally.

In 1928 she visited her four elderly aunts in Glasgow, which became her base for the rest of her life, allowing her to travel in Europe and particularly in Russia where she made some of her most striking work. However, after the war she became very reclusive. Joe Mulholland was her neighbour, but in the many years he knew her, she never referred to her photographic career and it was only after her death that the nature and scale of her achievement became evident.

The lecture will take place in the Mitchell Library, Glasgow, on Thursday 25 March 2010, at 6 pm. Admission free.

The Annan Lectures are presented by The Scottish Society for the History of Photography in association with the Mitchell Library.