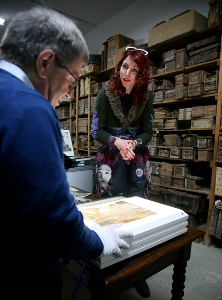 BBC antiques programme Put Your Money where Your Mouth Is discovered a Richard Ellis photograph from c1887 and, for the first time, travelled outside the UK to Malta to reunite the print with the original negative held in the Ellis archive in Valetta, Malta. The Richard Ellis archive contains over 40,000 glass plate negatives each meticulously recorded in the company day books and housed in wooden box cases.

As Katherine Higgins - who made the discovery and a former Christie's colleague of mine notes:

on the programme you will see the discovery of the Ellis photograph and the astonishing reunification of the image with the original photographic plate from the Richard Ellis archive. What was remarkable was that of all the 40,000 plates that record an astonishing array of photographic subjects from Edward VII (as Prince of Wales with his dogs and an un-named companion to military groups etc) only a few plates have suffered with age. One of those is the glass plate of the photograph I found – so bringing the image back to the archive meant they now have a clear copy of what the plate would have looked like. There’s a moment where I appear astonished as the lovely Ian Ellis, great grandson of Richard asked me to turn around and at that point he shows me the wooden cased camera that was used to take the photograph I have brought to Malta. The programme has never been abroad before and this turned out to be an astonishing adventure in the cause of recognising a great photographer. 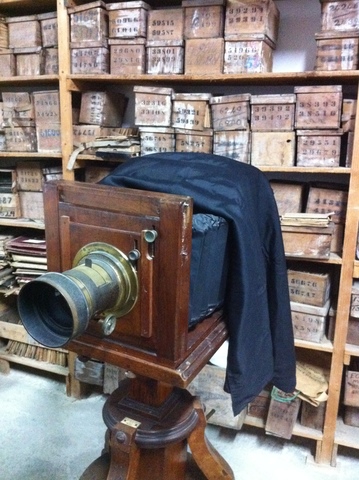 The programme airs on BBC2 at 5.15pm on 12 April 2012. There will be more on the BBC website closer to transmission: http://www.bbc.co.uk/programmes/b01g9hls

Images: Katherine with Ian Ellis – custodian of the Richard Ellis archive and great grandson of the Victorian photographer. Below: Richard’s camera, which he used to take all his portrait photographs