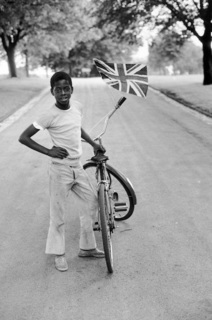 Described as the “greatest photographic document of Caribbean people in post-war Britain ”, the collection of 100 black and white photographs chronicling 40 years of Caribbean heritage in Birmingham by Vanley Burke, known as ‘Rivers of Birminam’, have secured a permanent home in the city, thanks to the Collecting Birmingham initiative.

The photographs are by far the largest and most significant collection of work by the celebrated photographer in any public collection. The 100 photographs were selected and grouped together by Vanley Burke and curator Lynda Morris for the ‘By the Rivers of Birminam’ retrospective exhibition, held at the MAC in 2012, and reflect Burke’s photographic work across over 40 years, from 1968 to 2011. A selection of these will initially be displayed at Soho House in the community gallery, which explores the extraordinary lives of everyday Birmingham people.

“These photographs are seminal in their representation of Birmingham’s Caribbean communities and the Handsworth area of the city from 1967 – they provide a unique window into the social politics of Birmingham from the 1960s onwards, recording the fight against racism through anti-National Front demonstrations and rallies, and also include Mohammed Ali’s visit to the city in 1983 as well as intimate portraits of communities and individuals such as the iconic photograph ‘Boy with a Flag’” comments Lisa Beauchamp, curator of modern and contemporary art at Birmingham Museums Trust.

“Vanley is a remarkable photographer, able to capture poignant and arresting moments through the medium of black and white photography. His ‘Rivers of Birminam’ series are unparalleled in their recording of Britain’s Caribbean communities, and tell a story of Birmingham and Black British history that feels as relevant and important now as they did when the photographs were first taken. We’ve had a small number of photographs by Vanley in Birmingham’s collection for a while, but it has been a long ambition of ours to be able to represent his practice more fully. To have ‘The Rivers of Birminam’ series of 100 photographs in Birmingham’s collection is incredible and I’m sure they will be cherished and enjoyed by our audiences.”

Burke’s photographs are taken from a unique perspective; arriving in Birmingham from Jamaica in 1965 at the age of 14, he has experienced first-hand the changes in his community and the city. His work offers an intimate view of the people around him, and remains rooted in these communities even as his reputation grew nationally and internationally. Whilst he has displayed his work at solo exhibitions in galleries in London, New York and Mali, he also exhibits his photographs in local venues such as community centres, pubs and schools.

Vanley Burke, said: “I am delighted the collection has found a permanent home in the city with Birmingham Museums. The photos reflect an important era of migration and settlement in Birmingham and it feels only right that the people represented in the images and their families can appreciate them for many years to come. In fact, I feel like the photos belong to the people of Birmingham as so many people feel connected to the stories and experiences documented in them and I’m very pleased they will now be part of the city’s collection.”

The works were acquired as part of the Collecting Birmingham project, a three year initiative run by Birmingham Museums Trust which looks to local communities to share their views on what items should be added to the city’s collections to represent them and their lives. “We are creating a unique record of life in our city for future generations – this isn’t just about our history but also the contemporary world in which we live, which will be our children and grandchildren’s history. Through focus groups involving many different communities within the city, Collecting Birmingham identifies a host of key items – from ancient relics to contemporary photographs – that will help us tell the stories relevant to people in the city today,” adds Lisa.

The ‘Rivers of Birminam’ images will go on display at Soho House on 27 April 2017 in the community gallery as part as part of The Extraordinary Lives of Everyday People exhibition, which includes a suitcase and objects from Mrs McGhie-Belgrave to reflect her arrival in Birmingham from Jamaica and her life and work in the city.

Soho House is open Wednesdays, Thursday, and the first Sunday of the month from 11.00am to 4.00pm, and entry to the visitor centre (including the community gallery), café and gardens are free. Admission to the house itself is £7.00 for adults, £5.00 for concessions and £3.00 for children; family tickets are also available.