Was Roger Fenton in a James Robertson/Felice Beato Photograph taken outside British Army Headquarters in the Crimea? 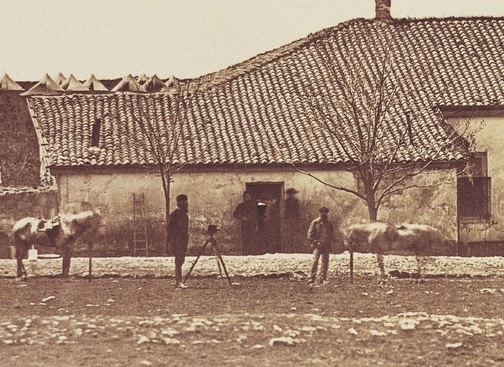 A photograph taken by James Robertson or his assistant Felice Beato entitled Head Quarters shows the British Army Headquarters outside Sevastopol in the Crimea. In front of the building is a man standing beside a tripod (see right). The Royal Collection Trust has the following description of the image on its website:

Photograph of the British Headquarters during the Crimean War. The building is a whitewashed bungalow with a tiled roof. Several horses and soldiers stand outside the building. A man, possibly the photographer Roger Fenton, stands beside a tripod to the left. A camp can be seen on the hillside behind the house.

The information about the identity of the man beside the tripod comes from a 1939 sales catalogue, which was advertising the copy of Head Quarters that had been owned by William Howard Russell, the war correspondent for The Times in the Crimea. However, was the man in the image Fenton or was the wording in the sales catalogue just a means of increasing the photograph’s perceived value to justify its price?

From evidence found in the subjects of their photographs, Robertson and Beato most likely landed in the Crimea on their first visit from Constantinople sometime in June 1855. Fenton’s only visit from England was from 8 March to 22 June 1855. Therefore, it is likely that the three were in the Crimea at the same time for only a possible maximum of 3 weeks in June 1855. There is no mention of any meeting with Robertson or Beato in Fenton’s detailed letters home. There is also no proof that Head Quarters was taken by Robertson or Beato in June 1855. However, there is evidence to suggest that it wasn’t.

Fenton’s portraits taken outside the headquarters building, which we know was on 6 June 1855, show trees to be in full leaf. However, the same trees in front of the building in Head Quarters are either leafless or have few leaves (see above and below). This indicates that the Robertson/Beato image was taken either in winter or early spring, but not in June. This is strong evidence that the man standing by the tripod in Head Quarters is not Roger Fenton.

The author believes that Head Quarters may have been taken in March 1856 during Robertson/Beato's second visit to the Crimea. They have another image taken at this time entitled South View of English Army Headquarters showing the other side of the  building with a leafless tree in the background. 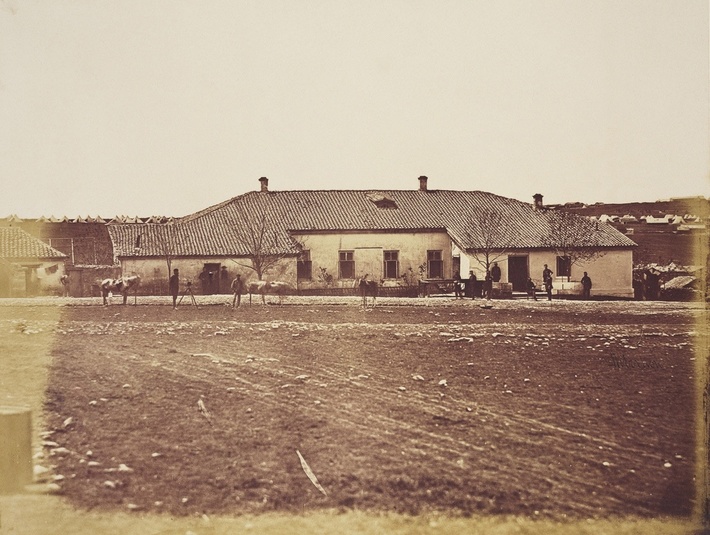 I thank Peter for his comments.

I would like to add that the person near the tripod has the name 'Arthur Ponsonby ADC' written underneath him at the bottom of the Head Quarters photograph held by the National Army Museum. The person sitting on the chair over to the right outside the well photographed doorway was identified as  'Lt. Col. R. Blane, Mil. Sec.' on the same image. Ponsonby was ADC and Blane was Military Secretary to the Commander-in-Chief Sir William Codrington, who took over as head of the British army in the Crimea in October 1855. This is more evidence beside the leafless trees that the picture was most likely taken in March 1856 and not June 1855.

Finally, saddled horses were common at British headquarters at most times as there were always officers with messages coming and going.

I agree the tree evidence is important, I will only note three things. One, the gentleman standing next to the tripod has a similar build and beard to Fenton, and Fenton did take portraits of officers either standing or mounted right outside the doorway shown in the photograph on the right - the one with the officer sitting in front of. Last, there are officers with saddles horses in the shot.